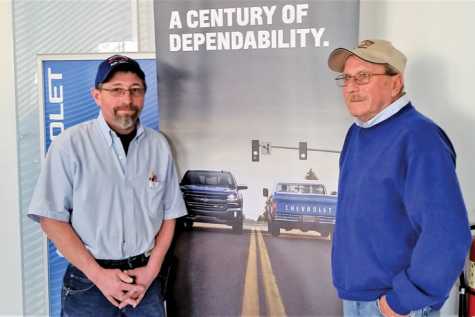 Not too many people can say they’ve been on the job for the same company since the age of 16.

For nearly 50 years, Julien has been a fixture at Troutwine Auto Sales Inc. in downtown Arcanum.

Julien was hired by Web Troutwine in 1970, while a student at Arcanum High School.

He said he took the job “washing cars and sweeping floors” at the dealership.

“I was paid $1 per hour,” Julien recalled. “And I always had some money in my pocket.”

Following high school graduation in 1972, Julien attended the former General Motor’s Fisher Body School in Cincinnati, where he was trained in collision repair and refinishing.

He returned to Troutwine Auto Sales Inc. as a certified body technician and, following the retirement of Ralph Eubanks in 1974, Julien took the position of body shop manager at the age of 20, supervising employees Boyd Hunt and Larry Fox.

Much has changed within the automotive industry during the past 48 years, Julien said.

“You used to open the hood and all you’d see is an engine,” he laughed. Today’s vehicles are “so complex with computers” running every component.

Julien said the one thing he’ll miss most is working with all the customers he’s met at Troutwine’s.

“I like the small town,” he said. “I [have] some of the same customers I’ve had for years. I dealt with some of the same people for the past 20 or 30 years and can tell you what cars they’ve owned over the years. I even had one customer who lives in Dayton give me a call the other day to tell me how much he liked working with me.”

Julien said he plans on spending time with his grandchildren as well as doing some “25-year maintenance” on his home.

“We lost our house in the Arcanum tornado in 1992,” Julien explained.

The “new” home he built is now 25 years old and needs some painting and upkeep, he said.

“I have plenty of interests to keep myself busy,” he said. “They (Troutwines) have been wonderful people to work for. We didn’t even work the week of the tornado, but still got a paycheck.”

“He’s just taking up where I’m going to be leaving off,” Julien said of Vore, who has been working at the dealership since July 2017.

Vore also will be performing many repairs as time allows.

Vore learned his trade while in high school at the Montgomery County Joint Vocational School, now the Miami Valley Career Technology Center. He began his career in 1986, at Howell’s Body Shop in Brookville. He also worked for a time at Weber Body and Frame in West Alexandria.

“I plan on retiring from here myself,” Vore said, welcoming those looking for quality truck and auto body repairs to stop in Troutwine’s and ask for his assistance.