Written by Jill Moon, The Telegraph 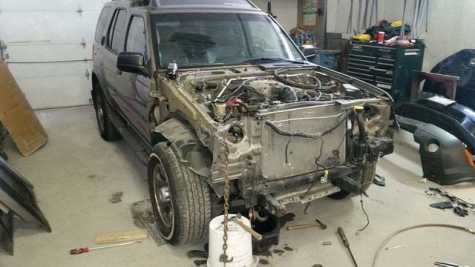 Pinto's Kustoms & Collision by “ProDaddy’s” business’s bread and butter is collision work, which makes up the majority of the shop’s business. Shop hours are from 8 a.m. to 4 p.m. Monday through Friday. Photo credit DRB Photography|For The Telegraph

The expansion of an East Airline Drive auto body shop benefits much of the business corridor, its owner said.

Pinto's Kustoms & Collision by “ProDaddy,” 57 E. Airline Dr. in Rosewood Heights, IL, is part of a tight-knit group of business owners who support one another and pay it forward whenever possible, the auto body shop’s owner, Ethan “ProDaddy” Humbert, explained.

A couple miles’ stretch of Airline Drive, in Rosewood Heights/East Alton, IL, is home to several hometown Madison County businesses that try to keep the market share moving between them. Humbert not only gives credit to his staff for Pinto's Kustoms and Collision by ProDaddy’s growth, but also to his neighboring business owners.

During a discussion with his neighbors about his customized painting and auto collision shop gaining 52 feet by 80 feet of space, due to an upcoming expansion at the rear of the property approved by Madison County officials, the neighborhood’s business community fully supported the decision, Humbert noted. He estimated the new construction will be complete within the next five months.

“The neighbors think it’s great for the community’s economy,” he said.

Humbert, a 1994 Alton High School graduate, started growing his business and reputation as a custom painter with a small shop, ProDaddy, in Wood River a dozen years ago. He also attended Alton’s former technical school, J.B. Johnson, while simultaneously attending classes at AHS from 1993 to 1994. He graduated with honors from Ranken Technical College for auto collision repair. He was enrolled from 1994 to 1996, which was also when he drag raced for the National Hot Rod Association (NHRA).

ProDaddy moved to Rosewood Heights seven years ago when Humbert bought Pinto Kustoms and Collision from former owner John Panapinto, to whom Humbert talks every few weeks. Humbert simply added his nickname moniker, "ProDaddy," to the shop’s title when he became the owner.

“John is a great body man. He left me a great business with established customers,” Humbert said.

Humbert admitted his occupation hasn’t made him rich, but in the last few years he’s made money.

“The graphics are all airbrushed or pinstriped---no decals,” said Humbert, who does his shop’s painting himself.

He recently bought a new home with wooded acreage in Bunker Hill.

“That’s a dream I’ve wanted for a long time,” said Humbert, who still owns his house of the last 18 years in Wood River, undecided whether to sell it. “Absolutely the growth of this business enabled me to realize that dream. But, [for] the first few years, I didn’t make any money.”

“We take pride in what we do. If it’s not right, we won’t let it leave,” Humbert said.

He characterized his shop manager of five years, Mark Schandler, as a “stud.”

“The shop doesn’t really function without him,” Humbert said.

He described his pair of body men---Jeff Laughlin and Greg Houser---as “amazing.”

Pinto's Kustoms & Collision by ProDaddy’s business’s bread and butter is collision work, but the heart and soul of it are in custom painting and exotic body modifications.

“We do a ton of custom motorcycles. We do the majority of Ted’s Motorcycle World (in Alton),” Humbert noted. “If 10 bikes drive by here, I probably did three of them.”

“We do a lot of the custom work together,” Humbert said. “We---all these guys---work together.”

Humbert also shares a special connection with Winners Circle Tire and Automotive owner Danny Michel, whose shop is located across the street from the St. Louis Regional Airport.

“We send him a lot of scan issues, related to ‘check engine’ light codes, and any mechanical issues unrelated to auto collision,” Humbert explained. “Danny---he just has a heart of gold.”

Humbert’s causes are as important to him as his paying customers.

“My entire family [is made up of] survivors of cancer,” said Humbert, whose late grandmother remained cancer-free for the last 20 years of her life. “So, I’ll do anything cancer-related in the community. I love to do tributes to cancer survivors, and I do memorials for cancer victims.”