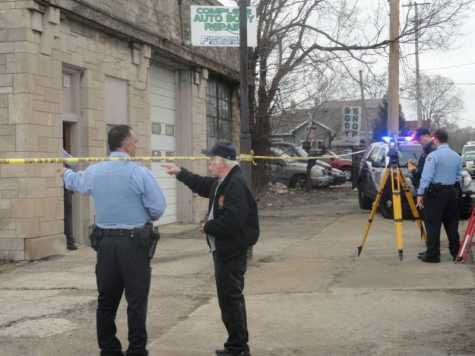 Martin stopped there on March 8, 2016, making him one of the last people to see Mike Oram, 48, and Jamie Wills, 43, before both were bludgeoned to death in a gruesome fashion with a hammer and a pipe wrench, according to testimony on Jan. 23 during the first day of the double murder jury trial of William "Billy" Krasawski.

As it turns out, Martin and his girlfriend made several trips to Specialty Fleet on March 8, 2016. Martin was trying to find a certain type of bolt to fix his girlfriend's blue-colored Mazda. Martin testified he was a third cousin through a marriage to the Orams, and was always a welcomed visitor at their shop.

That night, he made two visits to the Cass Street body shop after dark---first around 8 p.m. and again around 9:30 p.m. Martin vividly remembered a few people were hanging out inside the body shop: Oram, his girlfriend, Wills and "him," he testified, pointing his finger into the courtroom.

"Him," Martin testified, was the man in the gray suit with the blue tie sitting next to Will County Public Defenders Alexander Beck and Amy Christiansen.

The defendant, "Billy" Krasawski, is 42.

"This was the first time I had ever met him," Martin testified, referring to the double murder defendant.

"They were in there smoking cocaine---Mike, Jamie and the defendant," Martin told the courtroom.

Prosecutors asked their witness if the three were being secretive about their crack cocaine use.

"No, right in the open," Martin answered.

As for Martin, he steered clear of the drugs and searched the garage for another bolt to test on his girlfriend's car, he testified. At one point, he noticed "Billy" wander over to the back of the garage, an area commonly called "The Hole."

"I told Mike (Oram) and he said, 'Oh, don't worry about it,’" Martin testified. "That's where they kept all their tools (that) they lock down at the end of the night."

Martin testified Oram was not discreet about smoking crack cocaine inside the family-owned business as long as his father, who owned the place, was not around.

Doug Oram and another son, Doug Jr., discovered Mike's bludgeoned body the following day around noon. Joliet Police officers were on the scene within minutes.

"If his dad wasn't in there, he just did it," Martin testified, referring to Mike Oram's penchant for smoking crack cocaine in the body shop. "Mike was always open with it."

During cross examination, defense attorney Beck asked, "Did you ever smoke crack cocaine?"

Beck asked how Martin knew for sure the substance being smoked was crack cocaine.

"I’ve seen him doing it, and they were doing it right out in the open," Martin testified.

"Yeah, they were always together," Martin remembered.

However, Martin admitted during testimony that he was currently on probation for a drug-related offense.

When Beck pressed him about crack cocaine, Martin testified, "I sold it once or twice."

Next, Assistant State's Attorney Jeffrey Tuminello handled the questioning for Leah Spalliero, the girlfriend of Martin. When they pulled up to the body shop on the night of March 8, 2016, there was a maroon Ford Mustang parked outside, she testified.

The red Mustang belonged to the murder defendant, according to prosecutors.

"Was the red Mustang still there when you left?" Tuminello asked.

Another woman, Felicia Carnes, 28, testified that she drove to the body shop with her 5-year-old daughter to set up an appointment with Mike Oram to have her car's muffler and brakes repaired. She had just finished her shift at Subway, she recalled.

When Carnes had permission to enter the garage, "Jamie was in there. Everybody was in there on a chair."

"It was the defendant and it was Jamie and Mike ... Nobody left," she testified.

"Silly question, but Jamie and Mike---they were alive when you left?" Tuminello asked his witness.

The other Will County public defender, Amy Christiansen, tried to poke holes in the woman's testimony. As a result, Carnes conceded during cross examination that she did not see anybody upset or angry while she was inside the Cass Street garage.

"They were just laughing and giggling," Carnes testified.

Christiansen asked whether Mike Oram looked like he "was afraid of Billy."

Christiansen repeated the question, but asked whether Jamie Wills seemed "afraid of Billy."

The double murder trial for Billy Krasawski resumed around 9:30 a.m. Jan. 24 in Courtroom 407 of Will County Judge Dave Carlson. The jury consists of residents from across Will County. Trying the case for Will County State's Attorney James Glasgow are Derek Ewanic, Jeffrey Tuminello and Mike Fitzgerald.

Read 1132 times
More in this category: « Winter Mix Means Body Shops Are Busy in Missouri Accidents Are Up in ND, Sending Body Shops Into Busy Season »
back to top