Written by Michael Wunder, The News 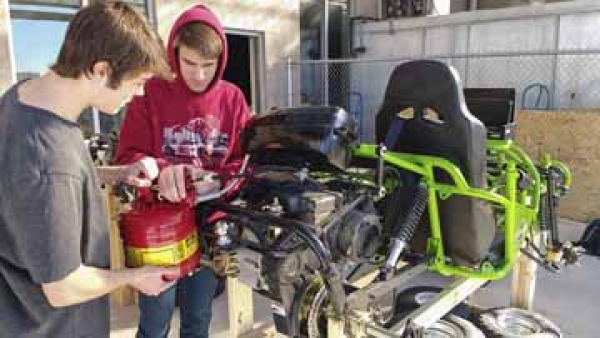 Waverly juniors Ethan Qualset and Cameron Trail work on one of the Waverly go-karts. Staff Photo by Michael Wunder

In the past, the class has focused mostly on theory, but the new go-karts will allow instructors to alter the curriculum to allow students to get more experience.

“Most of it has been theory,” Jones said. “In the past, we’ve had a little bit of ‘Let’s go out and check the oil or change the oil or change a tire’ kind of stuff, but this will allow us to go a whole lot deeper.”

Once the go-karts arrived at the school, Jones split the classes he had into three groups, each working on half of a car each period.

“It was kind of like working in the industry, where you do one part of it and someone else may be another part of it,” Jones said.

The structure of the lessons translated well to how someone going into a career in the industry might be organized, Jones said. That’s because the karts themselves aren’t all that different from a full-sized automobile.

That makes the vehicles the perfect choice for a classroom, where both budgets and space may be tight.

“It lends itself really well at a reduced cost to an automotive class where we can’t have a full-scale shop,” Jones said.

When the karts came in, the students began building them, piecing them together in teams to discover just how each component worked.

After the build process completed, the students were tasked with ensuring the vehicles ran properly. After creating a makeshift track above the freshman football field, the students took the go-karts for a test drive.

The vehicles came with the engine mounted and part of the suspension system mounted. Other than that, students were tasked with building them.

Recently, the class received a check for $1,440 from the Foundation for Education. Most of that money was used to purchase a fire cage for materials in the working area.

“We have been very blessed at Waverly with the community support that we have,” Jones said.

Some of the skills students gained in the classroom will benefit them for life, Jones said. Those skills include changing a tire, changing oil, knowing how to find a good used car and how to purchase car insurance.

“Some of those things can really save somebody a whole bunch of money if they know how to do them on their own,” Jones said. “The thing that these cars do, it lets us do all of those things on a much smaller scale.”

Student Cameron Trail said the class would be great for all students to gain experience with tools and car care.

“I think it should be a class you should take if you’re a new driver or you haven’t taken anything like that before,” he said. “It gives you understanding of how your car works and just knowledge about it, which is good to know.”

Ethan Qualset, another student in the class, said he thinks it’s a valuable class.

“I’m hoping the school will be able to do this for future groups as well,” he said.

The plan is to continue the hands-on approach, Jones said.

“The idea is that we want to try to auction those off to the community so that we can recoup the money and buy a new car,” he said. “Hopefully [we can] make a little profit on it and buy another car.”

We thank The News for reprint permission.