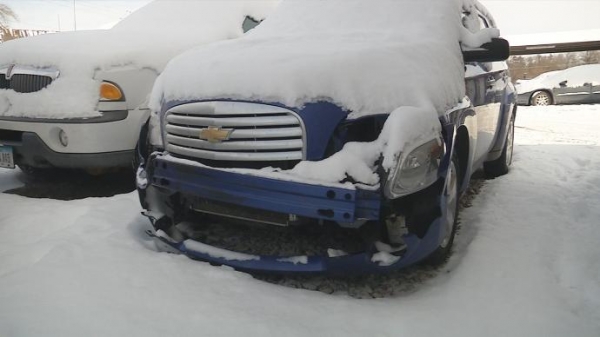 More than 80 accidents happened between the Cedar Rapids and Davenport areas during the snowstorm on Dec. 29, according to Iowa State Patrol.

Iowa State Trooper Bob Conrad said many of them could have been prevented simply by drivers slowing down.

The accidents are keeping a lot of body shops busy.

Four Guys Auto Sales & Body owner Scott Atwood in Cedar Rapids said they got about a dozen damaged cars towed there during the snowstorm.

He said they had to use their extra lot to find room for the cars and that most of them are totaled.

Atwood adds that it’s too cold for his workers to do anything outside, so there will be a delay getting the vehicles fixed.

"You can't work outside anymore, so the inside facility that you have, that's what you have to work in, so it just slows everything down to a crawl," Atwood said.

He said this can be common during the first major snowfall of the year.

"The winter came late this year. I think everybody is kind of unprepared. First snow, you always see more accidents than through the rest of the year," Atwood said.

We thank KCRG-TV9 for reprint permission.