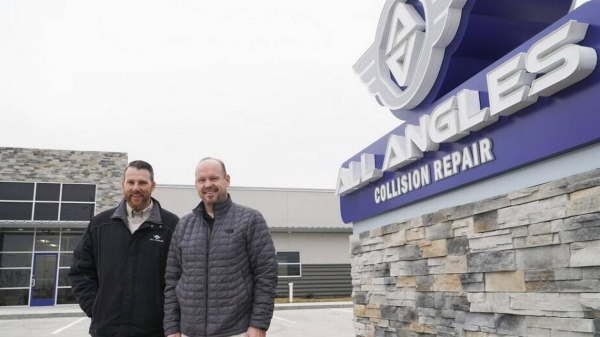 “That’s a goal we set--- to be open by the end of the year,” says general manager Ken Hunnell. “It took a little longer than we thought to get started.”

That’s because the new site at 2809 N. Greenwich was supposed to be the company’s third shop, but owner Steve Austin ended up buying another business in Newton this summer.

He acquired Brenneman’s Paint & Body Shop, which is now known as All Angles Collision at Brenneman’s Station.

“We wanted to pay homage to the Brenneman family business as well as the train community in Newton,” Hunnell says. “We did a lot of remodeling and upgrading.”

Then the focus shifted to the new 17,000-square-foot shop just south of 28th and Greenwich.

“We’re most excited about this one because it’s … our first ground-up build,” Hunnell says.

The West Street All Angles is a former Pep Boys site, and the East Kellogg site is a former Tractor Supply.

Those facilities are more than 20,000 square feet each.

The new one is smaller because it’s more efficient, Hunnell says.

“When we were able to have a blank slate, we were really able to look at things that caused waste or extra steps or processes,” he says. “It was pretty exciting to be able to say we’ve got this blank slate.”

Hunnell says a couple of years ago, All Angles changed its process for fixing cars.

Today, it’s a segmented repair process that he describes as an assembly-line approach where employees focus on one task only, such as disassembling a car.

In that case, Hunnell says it leads to fewer missed parts and overlooked damage.

“Small things can hang up a large repair.”

There’s also a reassembly team, painting specialists and body technicians. Hunnell calls it “very disciplined production. Everything has a meaning.”

He says the staff examined each step---in some cases “literally down to the steps from one department to another.”

For instance, they looked at where parts enter the facility and determined that instead of coming in the front, it made more sense to have them taken directly to where they’ll be used.

“Our thing is to seek and destroy waste in how we operate,” Hunnell says. “It has a very lean production mindset.”

The company already has a site selected for its next facility.

“We have property secured in the northwest part of town,” Hunnell says.

He won’t say where yet, and it’ll probably be a couple of years before anything happens.

For now, he’s got to focus on the new northeast shop.

“We’ve got everything kind of coming down to the wire,” Hunnell says. “They’re wrapping up the final construction.”

We thank The Wichita Eagle for reprint permission.

Read 958 times
More in this category: « ‘Car Santa’ Keeps Veterans on the Road this Christmas Season in MO Accidents From Iowa Snowstorm Keep Auto Shops Busy »
back to top