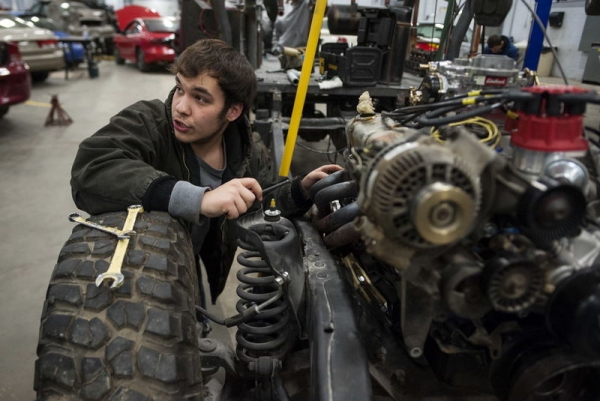 Jesse Jackson, a junior at Hoosier Hills Career Center in Bloomington, IN, looks to auto tech teacher Tony Feller, not pictures, for advice while working on attaching the engine to the frame of a truck based on the movie "Mad Max: Fury Road." Photo by Alex McIntyre, Herald-Times

The students at the Hoosier Hills Career Center in Bloomington, IN, wouldn’t call their long-running automotive project a “monster truck,” per se.

It’s more like a terrifying, steampunk-style, battle-ready “war rig.” With a spiked front bumper, toxic-looking chemical tanks and a wicked-looking mounted cannon, the truck looks like it would be right at home in the 2015 film “Mad Max: Fury Road.”

Which is exactly the point. The automotive students started working on the truck not long after the film came out.

The truck, of course, is not really meant to be a battle rig. The copper piping, pressure gauges and electrical boxes on the truck bed are all for show. Tanks that look as if they carry chemicals are actually empty, and the toxic-sounding labels on their sides are actually the names of ingredients in diet sodas. The spikes on the truck’s exterior are made of fiberglass, and the bullet holes and rust-colored, runny hand prints are all the careful work of the performance finishing students. The cannon, which looks like a futuristic ray gun, actually shoots T-shirts. When it’s finally finished, the students hope to roll it out for local parades or homecoming games.

It’s not entirely clear who floated the idea to build a truck inspired by “Mad Max” just to see if they could. Students say automotive collision repair teacher John Paul is the brains behind the operation. Paul points right back at the students, calling them the masterminds.

Either way, about a year and a half ago, the automotive students walked into the garage to find an old Ford Ranger waiting to be transformed. Since then, the truck has been coming together piece by piece, in the style of Frankenstein’s monster.

The originator seems less important to everyone than the sheer number of students who have been able to participate in the build.

“All the classes have gotten involved,” Paul said.

Performance finishing students took care of the paint job, marking up the cab with seams to make it look as if it had been welded together from several different sheets of metal. The welding students made the truck bed on which the cannon sits. A group of five or six automotive students stripped down a V-8 engine and rebuilt it to be worthy of their masterpiece. Even the computer tech support classes got involved, 3-D-printing a wind speed gauge as a cheeky decoration.

“They all got to work on this using their skill sets,” Paul said.

All in all, Paul estimates 50 to 60 students have worked on the truck since the project’s beginning. Many of them have signed their names to the roof of the truck’s cab, so their influence will be remembered. There is no overall designer for the project; it’s a mishmash of inspiration, innovation and madcap enthusiasm. PVC pipe has been shaped into a whistle that sounds like an oncoming train. Paul installed a retractable step that can be winched up with a bicycle pedal. He said he wants someone to install a xylophone made of PCV pipes.

“It just got out of hand,” he said with a chuckle.

“It blossomed,” a student corrected fondly.

The truck is not a project for class credit, but a labor of love. Paul has fronted most of the money for it himself, getting parts donated or at a discount. Nevertheless, the overall process of putting the truck together has offered plenty of educational experience. As automotive technology teacher Anthony Feller explained, most auto shops don’t strip down and rebuild engines to the extent the students have for their Mad Max truck.

“Building the engine was definitely a valuable classroom skill for them,” he said.

Across the board, the truck has provided a fun, constructive outlet for students to practice applying the skills they have learned at Hoosier Hills Career Center, and to test out whether automotive work is what they really want to do.

The truck has a ways to go before completion. On Dec. 6, the students practiced lowering the engine into its spot in the vehicle’s frame using a hydraulic crane. The automotive teachers watched at a distance, allowing senior Travis Webb to direct the placement of the engine he has had a large role in rebuilding.

“Be gentle! Like it’s a baby!” Webb called to his classmates, as they lowered the engine snugly into its cradle. The satisfaction of finally putting the engine in place, Webb said, is “the best feeling in the world.”

“I feel like a kid on Christmas,” Bryant joked. He said he’d feel even better if they let him drive it.

Of course, it couldn’t be that easy. A few moments later, an alarming crack sounded as the engine’s weight bore down too heavily on the power steering unit. The fit was too tight, and the students were going to have to lift the engine back out and find another way to tackle the problem. Like the rest of the truck, the process requires a lot of trial and error.