Building an Auto Repair Workforce in Kokomo, IN 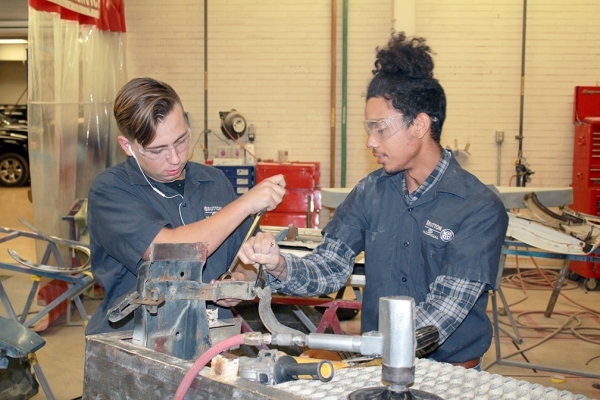 Local businesses are getting proactive at bridging the skills gap for automotive and collision repair technicians.

Button and McGonigal recently partnered with the Kokomo Area Career Center’s (KACC) automotive classes to offer paid internships, training and jobs to the students. It’s a win-win for the dealerships and the school, said KACC director Jonathan Schuck.

“When they have openings that they really need good applicants for, they say, ‘Do you have students who meet our needs?’ We help them out that way, and then they’re helping us by giving our students these great opportunities,” Schuck said.

The partnership began this school year after Don Frick, VP of Fixed Operation for McGonigal, Button & Twin City Dodge/Chrysler/Jeep/Ram, ABRA Collision and G&S Auto Parts, decided something had to be done about the shortage of technicians industry-wide.

After arriving to Kokomo in the spring, Frick began reaching out to schools in Howard County to see what kinds of programs were being offered. He eventually learned of the KACC program, and said it offers much-needed career paths for students who may not go to four-year colleges.

“I understand what the high schools are doing. They’re pushing kids to go to college. There are just some kids who are very intelligent and very bright, but that’s not where they want to be. There’s a huge opportunity in our industry to make a very good living and support their families and their lifestyle,” said Frick.

Getting more students to pursue careers in the automotive field is critical, as the skills gap continues to widen because of the aging technician population.

“Industry-wide, there’s a huge shortage of technicians [in] automotive and collision [repair], and this has been coming for a number of years now. Unfortunately, we haven’t prepared for this very well as an industry,” he said.

With KACC offering automotive repair and collision repair classes, Frick saw an opportunity to take those students’ abilities a step further by placing them in real-world jobs. While the students in the KACC program already work with the public by repairing cars that are brought in, they’re expanding their resume, learning in a different setting and getting paid while doing it through the new partnership.

Having that experience, Frick said, can help the students decide if the career path is truly one they want to take.

“We believe if we can get them very early on, treat them well, take great care of them [and] show them a career path, [then] our chances of retaining these folks are much better than trying to steal one at the dealership down the street, because those guys will leave you for the next shiny nickel,” Frick said. “We figure we can build our relationship and sustain that.”

Currently, several of the KACC students are working at Button and McGonigal through the internship program.

Frick said it’s a step in the right direction.

While Frick noted there’s no substitute for experience when it comes to making quality auto repairs, he said KACC starting the students young and the partnership helping further their skills are positive moves for the local industry.

Senior auto tech student Jacob Stambaugh recently started his internship on the lube rack doing oil changes and brake inspections. His hope, he said, was to prove himself and move up the ranks.

“As long as I prove myself there, I should get moved into the shop working with the techs and being trained,” Stambaugh said. “This gets my foot in the door in the industry, so I can further progress.”

In addition to the internships, another aspect of the partnership that has proven to be pivotal was the addition of supplying Button McGonigal uniform t-shirts to the approximately 130 students in the program, along with the teachers.

According to collision repair teacher Richard Shoffner, he never could have predicted the difference a t-shirt would make.

“You can almost see the kids make that transformation when they put the uniform on. They’re coming in, dragging their feet, got their pants sagging. They put their shirts on, and they pull their pants up like, ‘Let’s go.’ We flipped that switch, and that switch would be, ‘I’m acting professional because I look professional, because I feel professional.’ It’s just some cloth, but to these students, it just makes a world of a difference,” Shoffner said.

Randy Vaughn, auto repair teacher, said the uniforms also level the playing field for all of the students.

“It takes away the issue of, ‘My clothes are better than yours.’ It’s really brought up the morale,” Vaughn said.

He said the opportunity students have to be placed in jobs has also brought up the morale.

“They think it’s so awesome, and they’re just excited to go for the interview. The guys that get hired come back excited about it. The kids in this career center really needed the shot in the arm that there are people in town, people out there after school who are concerned with them and want to help them,” he said.