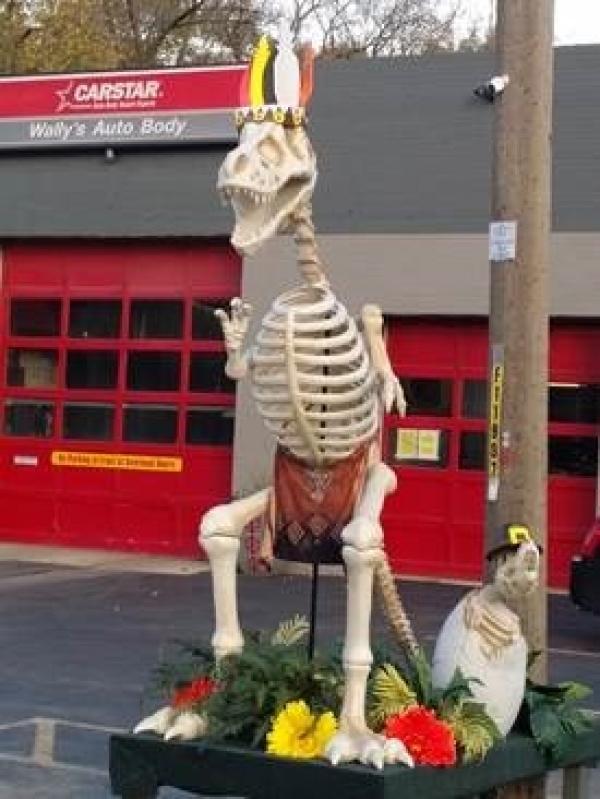 At CARSTAR Wally’s Auto Body, there’s a slightly prehistoric approach at the shop---not in the way it repairs vehicles, but in the form of the mascot that graces the front of the location and welcomes customers.

Named Wallysaurus Rex by local schoolchildren, the large T-Rex and baby T-Rex have been a popular attraction at CARSTAR Wally’s, located on high-traffic Golf Road in Des Plaines, IL.

CARSTAR Wally’s owner, Sherri Slater, first dressed them up in Chicago Cubs t-shirts and hats for the playoffs in October, and then prepared them for Thanksgiving as an Indian chief and pilgrim.  Holiday plans are under way for December, and Des Plaines drivers should keep an eye out for a very large Santa and his helper!

“We originally bought the dinosaurs for Halloween, but the public loves [them] so much [that] we decided to dress them for different holidays and hot topics,” said Slater.  “It’s a unique, fun way for us to connect with customers and stand out in our market.”

Read 2617 times
More in this category: « I-CAR Collision Repair Program at WKCTC in KY Saves Students Money Chaplain Gets Wheels to Help Give Care, Support in Omaha, NE »
back to top