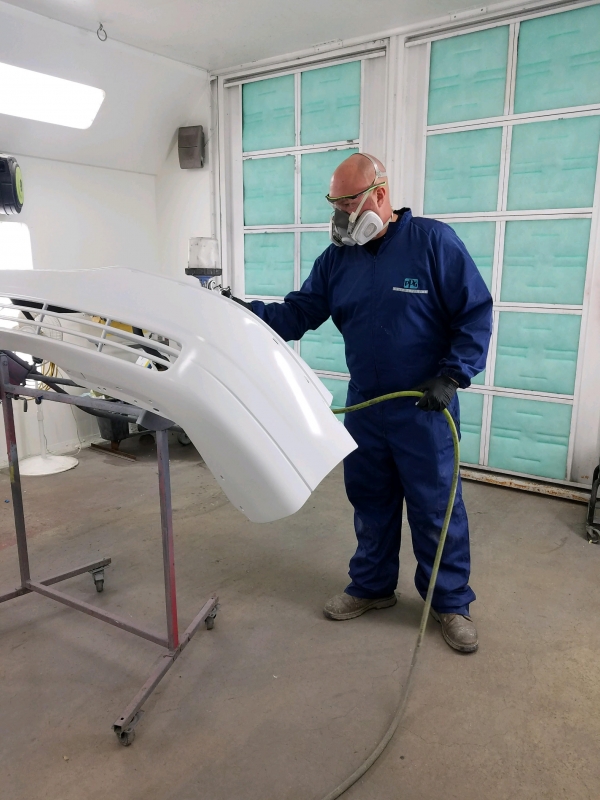 Ricky Rosa of Aurora, IL, said he had never even changed his own oil before applying to the auto body program at Waubonsee Community College.

“I needed a change in my life, so I did some research and found there was a desperate need for auto body technicians,” said the 30-year-old.

Once Rosa started asking around about community colleges, he said he “heard nothing but wonderful things” about Andrew MacDonald, the collision repair instructor at Waubonsee. He enrolled in August 2016 and “happened to love it.”

“It was all true,” Rosa said. “Andy took me from knowing nothing to being a solid auto body technician in a short amount of time.”

“When Ricky first came to my class, he admittedly had never turned a wrench,” said MacDonald. “Yet he was inquisitive, attentive and very eager to learn.”

MacDonald said that Rosa quickly became one of his most trusted students and his “go-to guy.”

“He excelled in everything he was taught, and I knew he would think it through and try to figure things out before he would ask me,” said MacDonald. “In my class, he put a quarter panel and a door skin on a 2017 Toyota Sienna van, along with several other jobs.”

Rosa said his favorite aspect of collision repair “by far” is painting. He also enjoys welding.

“Plastic repair was definitely a challenge,” he added.

Rosa said he prefers spending his time off with family over extracurricular activities.

“I have five daughters, so they get all my extra time,” he added.

“Ricky is a good family man, a hard worker and a good friend,” said MacDonald. “All of these are values I would want in a son if I had one!”

MacDonald recommended Rosa to the owner of KB Collision & Customs in Sugar Grove, IL, where he currently works and is about to start an internship.

“The internship is 240 hours and can be completed at an approved shop, or during your second semester at Waubonsee,” Rosa said. “But I think it’s important to be in the shop environment where the boss can make sure you’re always following safety rules, and that all jobs are [performed] to the highest quality and done right by car makers’ standards.”

As for future plans, Rosa said he wants to just keep getting better at painting.

“I would like to work for a paint company like PPG, or something similar, but I haven’t put much thought into it,” Rosa said.” There are a lot of avenues to go down.”