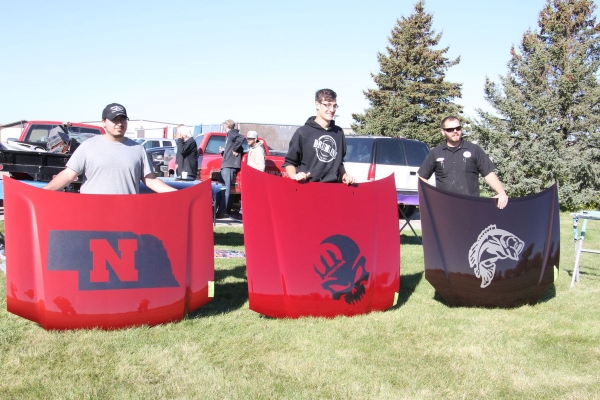 Students in the auto body program at North Platte Community College showed off their work Oct. 19.

Automobile hoods that came from wrecked vehicles were repaired and painted as part of a contest.

“One of the projects we do first (in our program) is the hood,” said MPCC auto body instructor Don Wilson. “We do all the primer, all the straightening, the taping, everything, and then we get to paint it.”

“It took me about six weeks to finish my hood,” Smith said. “The process starts out with assessing the damage of the hood.”

Smith said he stripped down the hood and pulled all the dents.

“From there, it’s really just a body-filling and smoothing-out process,” Smith said. “After primer and sanding, you choose your design. I chose this design because I love Nebraska; it’s my home.”

Smith is in the 12-volt technician program and is an audio installer and interior specialist by trade.

“I’m here really just to learn a little more about body work skills and how to work with metal,” Smith said. “It’ll help down the road because I like cars.”

Wilson said Smith’s hood was one of the worst to start with.

“His hood was one of the roughest,” Wilson said. “He was the last one done, but he had a bad hood. But he won the contest, so it paid off for him.”