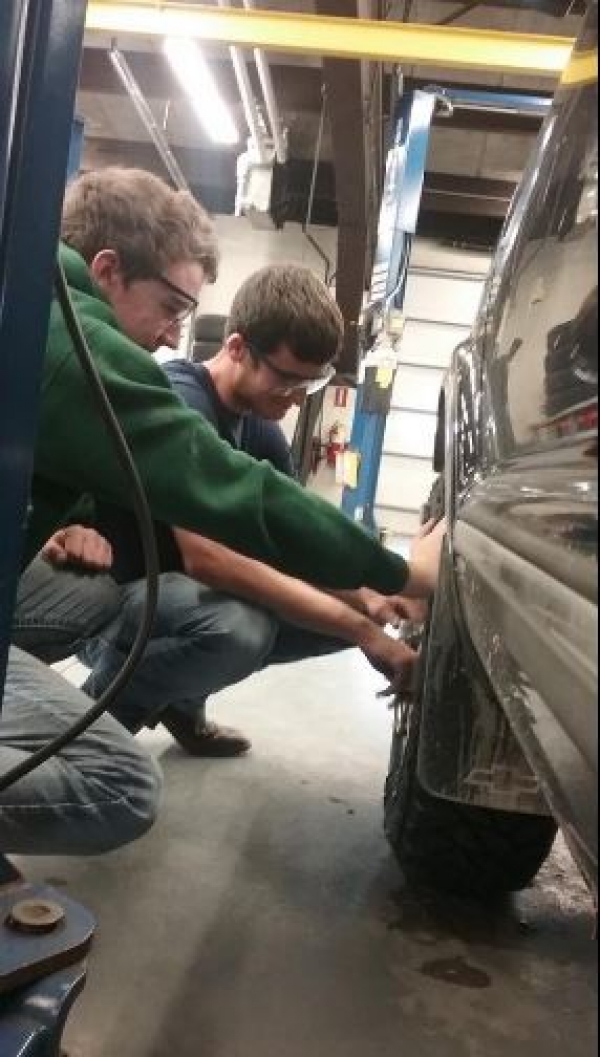 High school students have been able to take advantage of the Automotive Technology program at the college’s West Burlington campus for the past 20 years.

A new lab at the Keokuk campus, though not as equipped, is giving many students an option closer to home.

Area high school students have been able to take advantage of the fully equipped Automotive Technology lab at Southeastern Community College’s West Burlington campus for the past 20 years, and a new lab at the Keokuk campus began giving students some of the same opportunities closer to home in August.

“This is kind of the best-kept secret. A lot of counselors don’t tell students they have this opportunity,” said assistant professor Wesley Carpenter.

High school students from Des Moines, Lee, Louisa, Henry and Van Buren counties, as well as Hancock County in Illinois and Clark County in Missouri, can earn college credit by completing Introduction to Automotive Technology and Fundamentals of Automotive Servicing at either campus. Higher-level classes, however, are available only at the West Burlington campus.

Iowa high schools pay student tuition for dual-enrollment classes, but students from Illinois and Missouri must pay their own way.

Carpenter said the classes are a good option for students who just want to know more about the basics of car care, as well as students interested in pursuing a career in the auto tech field.

“You wouldn’t buy a car without taking it for a test drive. Don’t go to school without test-driving it,” Carpenter said.

“Say you want to change tires, change the oil, just the usual wear and tear,” Scarborough said of what they have done so far in the entry-level class.

Scarborough plans to open his own mechanic shop someday, likely in Mississippi, where he lived prior to moving to West Burlington three years ago.

Richardson spent the morning changing the front tires on his 1998 Chevy S10, one of numerous vehicles he has brought to the lab since the beginning of the semester.

"(Richardson) changes vehicles about as often as he does his homework,” Carpenter said.

Scarborough and Richardson are the only two high school students enrolled in auto tech classes at the West Burlington campus this semester. There usually are more, but nine students from Central Lee and Keokuk high schools are taking advantage of the Keokuk campus’s new offerings.

Next semester, Scarborough and Richardson plan to return to the West Burlington campus to take Automotive Suspension and Steering, Manual Drivetrains 1 and Basic Electricity.

Thanks to a $10,000 grant from the Iowa Auto Dealers Association, the Keokuk lab is equipped with auto lifts, tool chests and class-related equipment, but it doesn’t have quite the collection of the West Burlington lab, which has been adding to its equipment for the past 50 years. Carpenter estimated there is more than $1 million worth of equipment in that lab.

In addition to the lab’s lifts, computers, wheel balancer and alignment machine is a dynamometer--- dyno for short---which is like a treadmill for cars, allowing students to see what the car looks like while driving down the road without having to drive it out of the lab.

A Chevy Volt is currently parked atop the dyno, and a hybrid car sits nearby. The college purchased the two vehicles for the program, though students don’t get to work on them until the last semester of their second year during the Hybrid Fundamentals class.

The lab also has three diesel engines that were donated by Case New Holland. There isn’t a class or program that teaches diesel yet, but Carpenter said it may be only a year or two away.

We thank The Hawk Eye for reprint permission.

View the embedded image gallery online at:
https://www.autobodynews.com/index.php/midwestern/item/14139-scc-s-auto-tech-program-in-west-burlington-ia-offers-careers-a-jumpstart.html#sigProIde99031f543
More in this category: « Domestic Violence Survivor Receives Gift of Transportation in Wichita, KS Students Helping Students with Recycled Rides for Schools in Omaha, NE »
back to top