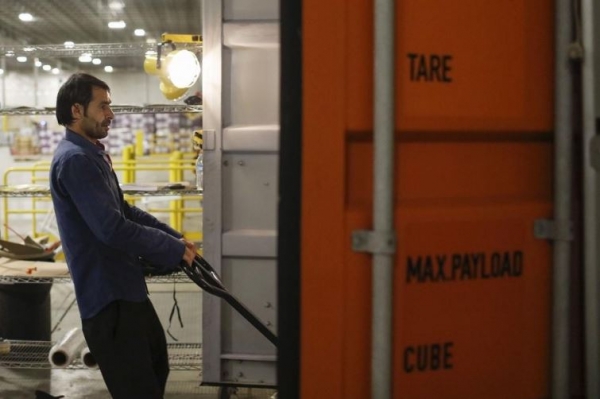 Kahled Alhedar pulls a pallet while working at a distribution center in Groveport. Alhadar is a Syrian refugee who got his job through Staffing Leadership Group. Joshua A. Bickel/Columbus Dispatch

Bob Juniper was close to giving up on finding enough quality employees when he got a call from Community Refugee and Immigration Services a few years ago.

Tara Dhungana, employment-services program manager at the Columbus refugee resettlement agency, was on the other line with a proposal for Juniper, the owner of Three-C Body Shops.

Dhungana said he had refugees who could work for Juniper and asked if he was interested.

“I was a little skeptical,” Juniper said, but he agreed to talk with them.

Now, Juniper has three employees through the partnership he later formed with CRIS, and they’re all great, he said.

“I’m always amazed by how motivated they were and how positive they were,” said Juniper, who has put the organization on the lookout for the next refugee interested in collision repair. “I’ve been super-impressed with them. I tell the CRIS folks to call me anytime and I’ll make room for one of them.”

Refugees, almost 1,000 of whom have settled in Columbus since October 2016, are providing an alternative workforce to many area companies that either can’t find skilled labor or that are committed to maintaining a diverse workforce.

Although refugees often speak English as a second language and may need certain time off for religious holidays, those “barriers” to employment are often outweighed by the positives of hiring the population, area employers say.

“These immigrants had better English skills than I thought they would have,” said Juniper, who was warned by CRIS that there might be a language barrier. Now, his employees who are refugees are learning faster than average employees, with one at the level of a three-year trainee after only two years at the company.

That sentiment is similar to how Debela Midjena has felt about his new job at American Electric Power Ohio.

Midjena, 38, originally from Ethiopia, fled almost certain persecution in his native country years ago and then more recently came to the United States to be with his wife. At first, he struggled to find employment as an engineer in central Ohio, living in Michigan to work there for three years before he was hired on in May by AEP in Ohio.

Midjena got the job after being connected with the company through Ethiopian Tewahedo Social Services.

“I see America as a land of opportunity. If you try to look for it, you can find the job,” he said. “You have to show the talent, you have to use every chance you get ... Everyone has to have a connection.”

Selwyn Dias, vice president of distribution operations at AEP, formed a relationship with the Ethiopian group this year when the executive director approached him.

“When he described the struggles immigrants have when they come to America, I could relate to that because I’m an immigrant,” said Dias, who immigrated from Kenya with his parents, who are originally from India, when he was young.

AEP believes, among other things, that “our employee workforce should represent the community we serve,” Dias said.

Marcus Gorman, who works for CRIS to help refugees find employment, visits local companies “to educate employers about roles refugees can play” and explain the benefits of hiring refugees. Jewish Family Services, resettlement agency US Together and the Ethiopian group also help place refugees in jobs.

“They’re hard-working, they show up, and they do a good job,” said Jill Kuhlman, vice president of the Staffing Leadership Group, which places employees in temporary positions in the logistics industry. She has been working with Jewish Family Services for about a year to place refugees.

“The feedback from clients has been really positive,” Kuhlman said. Often those placed in temporary jobs will be hired on full-time and promoted.

Refugees work in a wide range of industries, including logistics, hospitality and child care, Gorman said.

“There’s a shortage of labor,” he said. “There’s an American population that is unable to meet the requirements of employers like background checks, drug testing, or if they are, they’re just not willing to take an $11-, $12- or $13-an-hour job.”

The shortage is making employers get creative, Gorman said. The agencies meet with employers and explain the population, its barriers and benefits---at no charge.

Having refugees as a workforce is an advantage for Columbus, central Ohio and the state, he said.

“From a diversity perspective, it brings a whole new dynamic to the region,” he said.

Some disagree, saying refugees take jobs from American workers and are bad for the economy.

View the embedded image gallery online at:
https://www.autobodynews.com/index.php/midwestern/item/13942-central-ohio-companies-find-ready-workforce-in-recent-refugees.html#sigProIda3909bf84a
More in this category: « Two Linton, IN, Body Shops Pitch in to Help Humphreys Park CARSTAR All Line Builds Business, Relationships through Partnership with IL Honda Dealership »
back to top