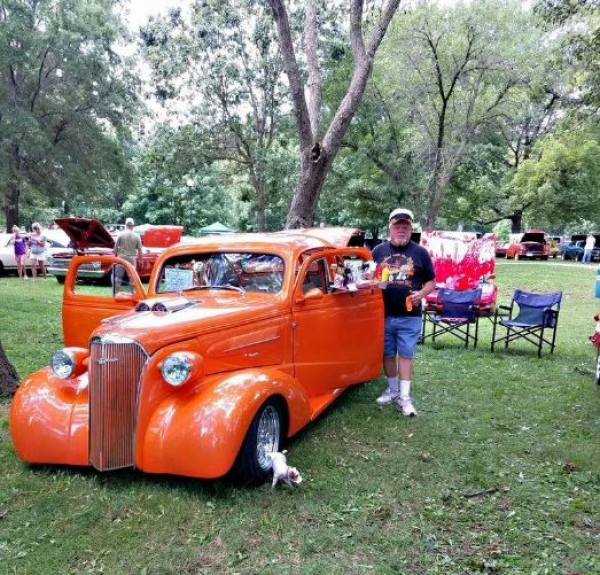 Bill McGaughey with his 1937 Chevrolet Coupe. McGaughey said at 2015's Ol' Marais River Run show, the Coupe was named in the Top 10 out of more than 2,000 cars. Photo courtesy of Bill McGaughey

In the last year alone, the car has racked up 25 awards, including first place at World of Wheels in Kansas City, MO. Recognition has extended anywhere from Best Paint, Best Interior to Best in Show. At 2015's River Run, 2,200 cars were on display, but McGaughey’s ’37 Coupe was awarded as one of the Top 10 cars. The color is identical to his wife’s 1967 Chevy Nova, which inspired him to mimic it.

“Something about that Coupe just pops---it looks good,” McGaughey said. “The color just has a ‘pow!’ Plus, you don’t see too many Coupes.”

“I’m kind of a motorhead,” McGaughey said. “I buy them, then recondition them, and then sell them...I stay pretty busy out there. A lot of times, seven days a week, I’m out here.”

The custom paint jobs are all completed by McGaughey.

“I’ve done a lot of classic cars from living out of my home. I have two big garages,” he said. “I’ve been doing that for over 35 years. I’ve done a lot of street rods, a lot of custom colors. I do all the flames, plus I do a lot of wholesale work, too, for dealers.”

Wholesale work, such as repairing bumpers or fenders for dealerships, is his “bread and butter,” he said.

“That way, money comes in every week,” McGaughey said. “But restoring cars, that may take me two to three months to do. It takes a long time to get your money back. You’ve gotta put out labor and different parts, then you get paid.”

Ninety-five awards have been snagged by his own candy purple 1955 Chevy. That car is his favorite, he said.

“I’ve had it for 10 years, and the first time I ever showed that car was in ’07, and I won Best Paint at the show, and there were like 300 cars there,” McGaughey said. “I’ve probably won 20 Best Paints with it---People’s Choice, Ladies’ Choice, Best of Show. I went down to Branson [Missouri] this past year, 10 years later, and I won Best Paint with it again. Same paint job. That’s a hell of a deal there.”

View the embedded image gallery online at:
https://www.autobodynews.com/index.php/midwestern/item/13892-electrifying-custom-paint-jobs-shell-out-pow-factor-in-ks.html#sigProIdd663741589
More in this category: « Wanted: People Who'll Work for $80,000 a Year PPG Shines at the Goodguys Nationals »
back to top