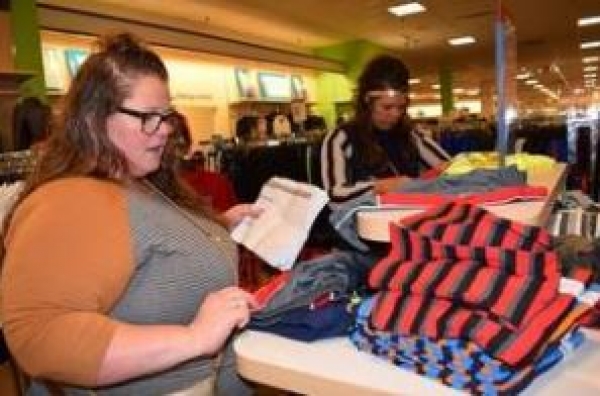 As U.S. citizens struggle in Puerto Rico after the most recent devastating hurricane, more Fort Wayne and area churches and groups are continuing to help survivors of earlier Hurricanes Harvey and Irma.

Donna Smith and her friend Laurie Hammond shopped Sept. 22 at J.C. Penney in Glenbrook Square for clothing for Harvey survivors in Katy, TX. Smith's husband, Gene, owns GT Autobody, which has been collecting sheet rock and other building materials not available in Katy, TX, along with hygiene items such as toothpaste and diapers.

The Smiths' church, Abundant Life Church, 3301 Coliseum Blvd. E., stepped in to “adopt” 16 families in Katy. So, Donna Smith and Hammond are using about $5,000 in donations to buy seven outfits, including shoes, for each adopted family member---about 400 outfits for everyone from senior citizens to toddlers. They also were buying toys for the children.

“I've just been amazed at the support of the community,” Donna Smith said.

She was hoping to find a way to individually package each family member's outfits and toys so it had a more personal touch. They are under a time crunch because the semi-tractor trailer will leave the next Monday. Twins Transport of Columbia City is donating the vehicle and transportation costs.

The Chapel, which collected items such as generators, dehumidifiers and shop vacs, and added diapers, water and other personal items, had a trailer leave Sept. 19 for Sarasota, FL, to help after Hurricane Irma stormed over the state Sept. 10. It was the Chapel's third trailer, said associate pastor Dave Walters. Brookside Church, 6102 Evard Road, was collecting items this week, so whatever donations the Chapel received would be given to Brookside, Walters said.

Volunteers were keeping an eye on Hurricane Maria, Walters said earlier this week. Maria struck Puerto Rico, the strongest storm in over 80 years, and has left its 3.4 million residents without electrical power as they try to recover from flooding, mudslides and other destruction caused by the hurricane.

While the American Red Cross of Northeast Indiana didn't expect to send anyone to Puerto Rico, the national agency was holding back any bilingual volunteers who might be needed in the U.S. territory from other assignments, said Katherine MacAulay, executive director of the regional agency.

During “gray skies,” the agency sees a lot more interest in volunteers for its disaster response area, MacAulay said. Volunteers must attend training, usually 4.5 hours in the morning and 4 hours in the afternoon, to prepare them. Fewer hours are needed for those in the medical field, including licensed practical nurses and emergency management technicians. Training is going on continuously, MacAulay said, so potential volunteers can apply online at redcross.org or call 484-9336.

We thank the News-Sentinel for reprint permission.