An Island in Wrigleyville, IL 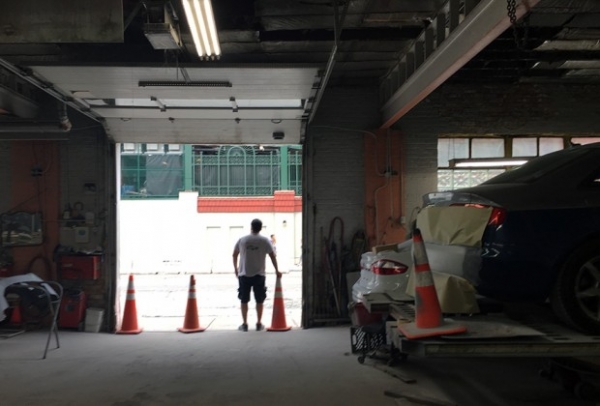 Walking through Wrigleyville, IL, lately, you’re just as likely to skirt around scaffolding as you are to dodge a drunken fan. The Resendiz family is used to the latter and acclimating to the former: They’ve owned and operated Luis’s Auto Repair for more than 50 years and seen plenty of changes to the neighborhood.

But the largest, most recent spate of development came straight to their shop door, in the form of a Cubs representative.

Roughly four years ago, Jose Luis Resendiz remembers, the team official stopped by offering to purchase the property. While the 60-year-old shop owner entertained the idea, nothing ever came of it.

“I said yes, but he must have not been serious because he never came back,” Resendiz says with a smile.

Luis’s Auto Repair, owned by Jose Luis and managed by his son Greg, has born witness to the neighborhood’s many transformations. Before pubs like Goose Island lined Clark and Addison, Jose Luis remembers laundromats, warehouses selling industrial equipment for restaurants, and other auto body shops that have since vanished.

Now, Wrigleyville is undergoing another makeover—more drastic than the revolving door of businesses that they’ve grown used to. After the Ricketts family bought the Cubs, they scooped up properties surrounding the stadium, including rooftops to the north and east, as well as a forthcoming hotel and the recently opened Park at Wrigley to the west. South of the ballpark, M&R Development and Bucksbaum Retail Properties acquired a substantial swath of land that will become the $140 million Addison & Clark mixed-use complex with 148 luxury apartments, a 5,700-square foot clubhouse, Cinemex theaters, and Shake Shack.

But what it doesn’t have is a storefront at the prime location just south of the iconic Wrigley Field marquee—that’s where Luis’s Auto Repair stands, one of the last family-owned-and-operated businesses next to the Friendly Confines.

All in the family

The repair shop has been in the family since 1966. Jose Luis’s father worked on an assembly line at Ford Motor Company in Mexico before immigrating to Chicago from Mexico in the mid ’50s. When he arrived, he started working at an auto body shop at Southport and Irving Park before renting the shop that would become Luis’s Auto Repair at 1031 West Addison Street, Jose Luis says.

At the time, the Resendiz family lived in an apartment a few blocks away on Grace and Magnolia. Jose Luis would spend after-school hours and Saturdays learning the trade alongside his father.

“When I was about 12 years old, my dad would make me come to his shop after school,” he recalls. “I’d come over and help my dad sweep the floors and organize the nuts and bolts. After I was done, I’d ask him if I could go home, but he would never let me leave until the shop closed at six o’clock.”

Jose Luis started by sweeping the floors, gradually gained more responsibilities, and ultimately learned how to do all the bodywork including collision damages, bumpers, lights, and windows.

“He worked his way up to become a master craftsman of the trade,” Greg says.

Like his father, Greg and his two brothers grew up around the shop, coming in on the weekends to sweep and clean up. Afterward, they would head to batting cages at Sluggers down the street.

The 33-year-old remembers his grandfather moving into the apartment above the repair shop, where he lived until he passed away 14 years ago.

“He was committed to the shop---he worked until the very end,” he says.

Life across from the marquee

A handful of Cubs fans clad in jerseys and baseball caps ambled past the shop on a muggy Thursday afternoon in August, snapping photos of Wrigley Field from across the street before making their way into the stadium.

“In a couple of hours, this place will be packed with people,” Greg says. From the garage door, he watches the crowd grow in front of the stadium before a ringing phone redirects his focus back to the shop.

Over the years, Jose Luis and his employees have learned to help customers maneuver around traffic and road closures on game days. Greg acknowledges the redevelopment has been challenging.

“On game days it’s difficult to have cars delivered because of street closures,” Greg says. “We plan around the restrictions. We make it work.”

The family used to park cars in the former Bar Louie parking lot---the property owner who had known Jose Luis for many years---until last year, when redevelopment for the Addison & Clark complex began.

Jose Luis stands on the sidewalk, talking with a client and surveying the damage on his car before making his way to the office to write an estimate. The shop thrives on word-of-mouth, with customers referring family members and friends to the shop. Jose Luis frequently gets customers who say, “You did work for my dad, and he told me to come here.” A 4.5 rating on Yelp helps, too.

View the embedded image gallery online at:
https://www.autobodynews.com/index.php/midwestern/item/13798-an-island-in-wrigleyville.html#sigProId55b9f61a10
More in this category: « Maaco Collision Repair and Auto Painting Opens in Lynwood, IL KY and IN Shop, Lefler Collision and Glass, Celebrates 65th Anniversary »
back to top