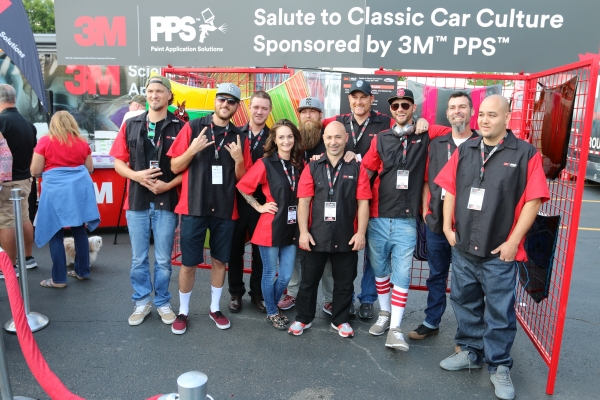 3M's Automotive Aftermarket Division invited 10 leading painters from around the world to illustrate their vision of classic car culture on a hood, using the 3M™ PPS™ System and other 3M automotive products at the 2017 Woodward Dream Cruise.

Ten of the world’s top painters from Australia, Germany, Canada and the USA displayed their unique automotive artwork at the inaugural 3M PPS World Cup at the 2017 Woodward Dream Cruise on Saturday, August 19 in Detroit, MI.

Invited by 3M to illustrate their artistic vision of classic car culture on a hood using the 3M™ PPS™ System and other 3M automotive products, the painters made themselves available to discuss their creations at the Dream Cruise, where the unique hoods were unveiled.

In a celebration of classic car culture, the 3M Automotive Aftermarket Division stole the show at the Dream Cruise with special guest Chip Foose, legendary automotive designer, who signed autographs for fans and gave advice to the 10 painters featured in the event. The 3M Demonstration and Education Mobile Operations (D.E.M.O.) trailer showcased its latest 3M solutions for automotive repair and maintenance with hands-on demonstrations for body repair, paint preparation, vehicle painting, paint finishing and vehicle appearance during the Dream Cruise.

With painters from all over the planet, the event offered Detroit a unique opportunity to learn the art of automotive from 10 different perspectives. Some of the participating world-class artists were seasoned veterans on the collision repair side of the business, while others were up and emerging, such as Connie Manjavinos, who is only 25 years old, and Pablo Prado, who is known as one of the top up-and-coming lowrider painters on the West Coast.

All of the 10 painters had begun working on their hoods two days prior to the Dream Cruise at the PPG Training Center in Wixom, MI, where they sprayed together and shared stories. When a reporter asked Danny Schramm, one of the German painters, if the painters were sharing ideas and secrets, he replied, "Yes, all of these painters have learned much from me already!"

Jacob Miles from Milestone Paint and Body in Mt. Juliet, TN, started out painting cars with his father, and today owns a top tier custom shop. He was honored to be one of the 10 painters selected for the event, and spent a lot of time meeting the other painters.

"This is a great group, because we all come from different parts of the world and have different ways of painting cars," Miles said. "The attitude here is, ‘Let's work together,’ and we're already making arrangements to stay connected well after this weekend is over."

Carmine De Maria from C.A.D. Custom in Melbourne, Australia has been painting for 25 years. A decade ago, he came to the U.S. and met with other painters. It reignited his career and he began focusing on customs, hot rods and full restorations as a result. The hood De Maria created featured a boxing kangaroo with a green and gold background.

"Coming here is truly a big deal for me and for my company, because it's recognition that's coming from 3M," he said. "I am representing Australia, which means I have to do a good hood that people will like, but it also shows my style and creativity."

Pablo Prado from Los Angeles, CA, is one of the hottest painters of lowriders in the country right now. One of the younger painters invited to be in the 3M PPS World Cup, Prado brought some West Coast flavor to the event.

"I'm self-taught pretty much, and it's really an honor to be meeting all of these other painters," Prado said. "I've been doing this for around 10 years now and I basically do lowriders, so I appreciate seeing other styles and techniques."