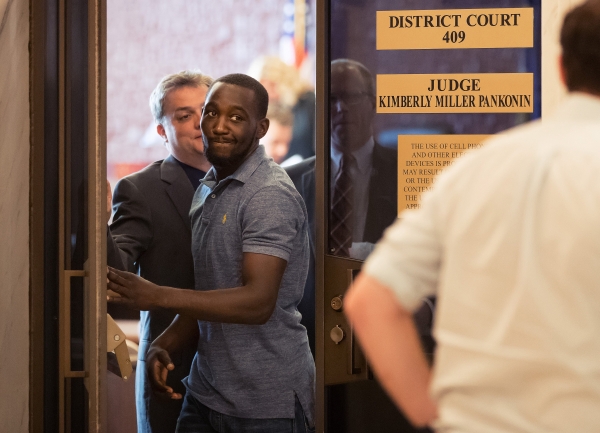 Boxing champion Terence “Bud” Crawford no longer faces 90 days in jail for his role in an April 2016 confrontation at an auto body shop in Omaha, NE, a district court judge ruled August 23.

Judge Kimberly Miller Pankonin reversed Crawford’s conviction for property damage and the requirement that he serve 90 days in jail as a condition of probation, according to court documents.

In December, County Court Judge Marcena Hendrix had found the 29-year-old boxer guilty of disorderly conduct and causing property damage during an altercation at a body shop. The charges were misdemeanors. She dismissed a trespassing charge.

Pankonin said it would be up to the county court to decide whether restitution was still proper, based on Crawford’s disorderly conduct.

Attempts to reach Crawford and the body shop owner for comment were unsuccessful. Omaha City Prosecutor Matt Kuhse said he would not appeal Pankonin’s decision.

“In the grand scheme of things, one conviction was maintained. He’s still going to ... be on probation for a year,” Kuhse said. “I think everybody needs to kind of bring this to a close. He needs to serve his sentence. We need to get the victim his restitution.”

Crawford and the body shop owner, Michael Nelson, both agreed that on April 4, 2016, Crawford went to Extreme Custom Fleet & Auto at 56th Street and Sorensen Parkway intending to reclaim a car.

The shop had performed a $2,500 paint job and other work on a 1984 Chevrolet Monte Carlo. Crawford had paid half as a down payment but later refused to pay the rest, complaining about the quality of the work and the six months the vehicle had spent in Nelson’s garage.

Crawford and a few friends went to the shop and told Nelson they were taking the car.

Nelson testified that he had placed the Monte Carlo on a hydraulic lift and left a 600-pound engine underneath to discourage Crawford from taking the car.

Crawford was able to lower the car to the floor after pushing the engine out of the way by himself, Nelson said. Nelson said Crawford caused $3,300 in damage to the hydraulic lift, and fluid spilled onto the shop floor.

Nelson said that he felt intimidated by the boxer’s presence but that Crawford never physically threatened him. The incident was captured on a surveillance video that was played at trial.

Crawford and his attorneys appealed the sentencing.

Pankonin, in dismissing the property damage count, wrote in her order: “The evidence presented during the trial does not establish who caused the damage to the hydraulic lift.”

Regarding the disorderly conduct count, Pankonin wrote that there was enough evidence to convict Crawford. “The evidence clearly shows the defendant used intimidation, and at times force, to accomplish his goal.”

The restitution sentencing was also not done properly, the judge wrote. “The court simply ordered the defendant ‘to pay the restitution as set forth in the presentence investigation.’ ... A sentencing court cannot just rubber-stamp information provided in the (report).”