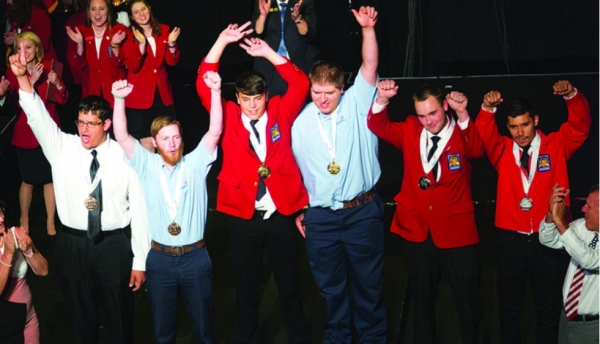 “Honestly, my background would be that I always kind of liked tinkering around with cars,” Hartstack said. “And it’s something that I’ve just enjoyed doing as a free time type thing---and I figured if I can do it and make money at it, I might as well give her a shot.

“I decided to enter it (the competition) because I thought it’d be fun to compete. And I figured I’d get the day off of class, and since I got the chance to go to nationals, I figured, ‘Hey, it’s a week off of work, and I knew you could win some cool tools,’ so I thought I may as well give her a shot.”

The National SkillsUSA Championships is an industry elite level of competition. Contestants hail from all 50 states, each having won their respective divisions’ state competitions.

The purpose of the championships is to “reward students for excellence, to involve industry in directly evaluating student performance and to keep training relevant to employers’ needs.”

Throughout the championships, more than 6,000 contestants competed across 100 different events. SkillsUSA is a multimillion-dollar event, and occupies a space equivalent to 16 football fields.

“(It was a) very strict competition,” said SWCC auto collision repair and refinish instructor Jeff Magneson, who accompanied Hartstack to the championships. “As a matter of fact, if they get their cell phone out, they’re disqualified. If they talk to anybody over the fence, they’re disqualified. If they have to go to the bathroom, they’re escorted to make sure there’s no cheating or anything like that. They have to wear a uniform — you almost compare it to the military. They’re very strict and disciplined about their competition.”

After these four days of competition, Hartstack emerged as gold champion. And although he did not expect to win, others were less surprised.

“Joel---and he’s received our outstanding student award---we knew we had a high quality student,” said Magneson. “He’s a farm kid, and anytime you get that you get a pretty good work ethic---and they’re pretty good with their hands--- so we pretty well knew he was top-tier. And that’s the neat part of these contests; it gives you a neat chance to see how your students stack up against other programs in other states, and he definitely proved himself.

“Joel is pretty laid back and confident. He doesn’t get rattled very easily. He’s very intelligent---he picks up on things very quickly. And we don’t do a lot of practice for these competitions, so we kind of rely on the training we’ve been doing for these last two years to prepare them. And Joel represented Southwestern and Iowa very well. Couldn’t have asked for better.”

And what’s next for Hartstack? Does he plan on continuing in auto collision repair?

“Definitely---and as a career. That’s what I’m planning,” Hartstack said. “That’s what I’m doing now, and that’s what I like doing. I feel like I can make some money at it, and not hate going to work every day.”

Read 1155 times
More in this category: « After Hot Rod Crashes, the Owner is Suing Wichita Business for $700,000 'Working Feverishly': Roofers, Auto Shops Race to Keep Up with Carthage Hailstorm Recovery »
back to top