Ring the Bell - Antique Fire Truck Gets Restored in Time for the UP Firemen’s Tournament in Florence, WI 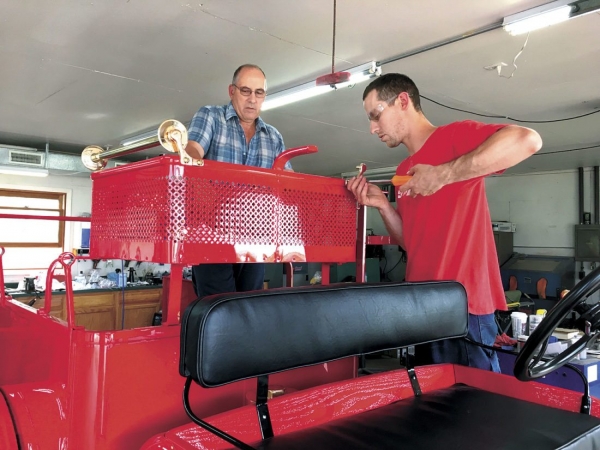 DANIEL ZOPPETTI and his father, John, at left, put some of the final touches on Florence’s antique fire truck. The restored 1917-18 vehicle will be unveiled on July 9 in Florence. (Submitted photo)

After almost a century, Florence’s antique fire truck was showing its age.

The community realized “the truck needed some tender love and care” after it was brought out when Florence hosted the UP Firemen’s Tournament for the first time in 2009, said Debbie DeMuri, Secretary/Treasurer of the Florence County Historical Society.

It’s taken a few years, but the historical society, along with the Town of Florence and Florence Volunteer Fire Department, will show off the newly restored 1917-18 fire truck at 2 p.m. on July 9 at the Encore on Central in Florence.

The town acquired the Ford truck in 1917. But as it was replaced by more modern models, the 1917 truck went into storage, save for being “dusted off during celebrations such as the Florence Labor Day parades,” DeMuri said.

It was spruced up a little before the 1980 Florence County Centennial, when Larry Olson repainted the truck and Peter DeMuri of Florence Motor Sales got the vehicle in top running order.

“Back into storage it went, but was occasionally taken out for fire tournaments,” Debbie DeMuri said.

Daniel Zoppetti stepped forward in 2014 to take on the task of restoring the truck.

He began tinkering with cars while still at Florence High School, then went on to graduate from Northeast Wisconsin Technical College, specializing in auto body repair. He now works for Gandrud dealership in Green Bay.

On his own time and in his own garage, Zoppetti began the intense job of taking the truck apart — cleaning, sanding and painting, piece by piece.

“Some parts needed to be replaced, such as the wood flooring and the wheel spokes, but by and large, the vehicle is original in frame and body,” DeMuri said.

The project has taken nearly three years to complete, with countless hours of meticulous work by Zoppetti.

His father, John, helped along the way and John Roberts assisted with the woodwork on the box floor and seat.

A PowerPoint presentation of the truck restoration and activities by the Florence Volunteer Fire Department, which is celebrating its 100-year anniversary, will be shown as well.

Tim Bomberg, Town of Florence Chairman, will recognize Zoppetti and those involved with the project. All fire departments around the county will be thanked by County Board President Jeanette Bomberg.

Fire Chief Joe Witynski also will outline activities planned for the 2017 UP Firemen’s Tournament in Florence on July 28-30.

Viewing of the truck will take place next door at Florence Motor Sales, where it will remain on display until the Firemen’s Tournament.

Read 1254 times
More in this category: « Hail Damage from Storm that Insurers Now Call a Catastrophe Could Top $80 Million Service King’s Chicago Teammates Contribute $45,700 to Angels on Assignment »
back to top