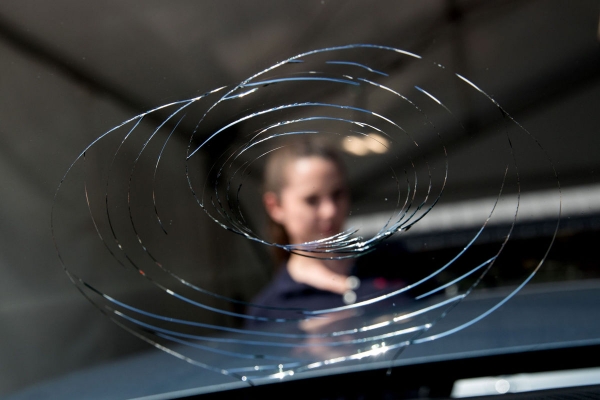 Dick Seitz's Honda CR-V is among the thousands of vehicles damaged in the June 29 hailstorm. Seitz took his vehicle to a drive-thru insurance claims office in La Vista.

Dick Seitz (Class of ’61) and his Cathedral High School buddies were at Mama’s Pizza on Saddle Creek Road [in Omaha, NE] on the evening of June 29, telling stories of the old days, when they heard what sounded like firecrackers outside. The noise actually came from hailstones, some as big as 4 inches in diameter.

Within a few minutes, Seitz’s 2010 Honda CR-V had dozens of dings and dents — one of them deep enough to chip paint and break the lens on his right headlight — and cracks arrayed like a spider web in his windshield.

“I couldn’t believe it,” said Seitz, who was at a drive-thru insurance claims office in La Vista this week.

The math for this catastrophe:

So far, 6,370 State Farm Insurance clients have claimed damage from the storm---4,550 of them for vehicles and most of the rest for roofing. State Farm covers about one-fourth of the vehicles and houses in the state, so the total number of claims could reach 25,000.

Most of the hail fell in two swaths of the metro area, one starting in Irvington and spreading east through the Keystone, Benson, Country Club and Dundee neighborhoods, and the other farther south, from about 180th and West Center Road toward Offutt Air Force Base.

Among those with hail damage to vehicles in that southern stretch: Travis Dingman, whose family owns Dingman Collision Centers.

“I stood in the garage and watched it get pelted,” Dingman said. “It got some pretty big dents.”

So far he hasn’t scheduled an appointment for his SUV, although others are coming to the Dingman locations to have dents smoothed out or body panels replaced. Most of the broken glass has been replaced by auto glass shops, and now the body work is underway, with thousands of cars in the city due to seek repairs.

“The customers are showing up with their insurance estimates,” Dingman said.

The insurance and repair work is moving quickly with cars. Replacing windshields and other vehicle glass is a top priority to prevent water damage, said Brice Huddleston, who heads a 40-person State Farm catastrophe team in Omaha. The drive-thru office at 8614 Giles Road is writing about 160 claim checks a day.

Geico spokesman Rich Johnson said most of the clients’ 2,000 claims from that week’s storm — in Nebraska, Iowa and Illinois — were for damage considered “low- to mid-severity.”

In the category of ill wind blowing some good, Mike Durkin, general manager of Woodhouse Ford at 3633 N. 72nd St., said the dents and broken windows for the dealership’s 400 new vehicles and 100 used vehicles — none of them total losses — mean bargains.

“It was the right level of damage to pass along really good savings and still have a good vehicle,” Durkin said.

After appraisals, Woodhouse sets a price on each car and truck, he said. About 50 have been sold so far.

“Some people are willing to take it like that, and some want to have work done on it,” he said.

Most repair work hasn’t started on homes yet because homeowners and insurance companies are still in the claims stage.

The hail likely damaged thousands of Omaha roofs, but often not siding or windows, said Jamie Pflug, who started Lastime Exteriors with his brothers, Tom and Tony, in Omaha 21 years ago.

“It came down straighter than normal,” Pflug said, with hailstones big enough to damage standard asphalt shingles and even pound holes in the tougher asbestos shingles found on some of the older homes in the area.

The company, owned by Tyler Wingate, has been in residential and commercial construction for 50 years. Crafts began storm repair work a few years ago and opened an Omaha office earlier this year after restoring some homes in the 80th Street and Hartman Avenue area in 2016.

Visiting neighborhoods in person and offering free inspections, she said, “is a type of lead-generating service. It’s a way our salesmen get into the field, get themselves known.”

Previous Page Continue reading »
Read 3700 times
More in this category: « Springfield Woman Gets Two Years for Embezzling from Auto Body Shop Ring the Bell - Antique Fire Truck Gets Restored in Time for the UP Firemen’s Tournament in Florence, WI »
back to top