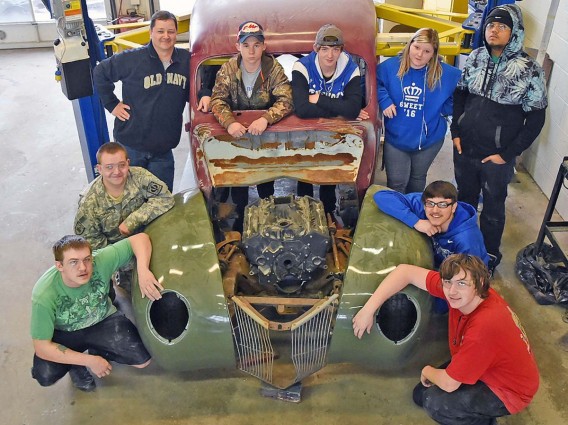 In this April 2016 file photo, Mason County Area Technology Center students and instructor Daniel Thomas gather around thier project, a 1940 Ford that they rebuilt and converted to a 'Rat Rod' in their auto body class. (Photo Credit: Terry Prather, The Ledger Independent)

The auto body mechanic program at the Mason County Area Technology Center in Maysville, KY will be shelved for the next school year, while the machine tools program will continue.

During a meeting of the Steering Committee at the center on Wednesday, MCATC Principal Jeremy McCloud said the auto body program will most likely be replaced by a diesel technology program, but not until the 2018-2019 school year.

"In the meantime, we'll try to get the auto body students over to other programs," he said.

McCloud said the reason the auto body program is ending is due to a low student-teacher ratio number.

"It's difficult to explain," he said. "But, basically, the requirement is to have 12.5 STR and the auto body was around 11.9. STR doesn't necessarily mean the amount of students."

"We have some students who attend two hours and some who come for three hours," he said.

McCloud said there are other programs offered at the center, including welding, electrical construction, pre-nursing and automotive technology.

Originally, the machine tools class was being considered for removal, but due to machine tool skills being in high demand for jobs, it was decided to keep the program, according to McCloud.

"We have a lot of students who enjoy that program and, according to a study released by the state, machine tool jobs are currently in high demand," he said. "We didn't want to get rid of a program that could allow our students to gain skills that are needed."

McCloud said the center will be re-hiring for the machine tools position over the summer.

Thank you to The Ledger Independent for reprint permission.