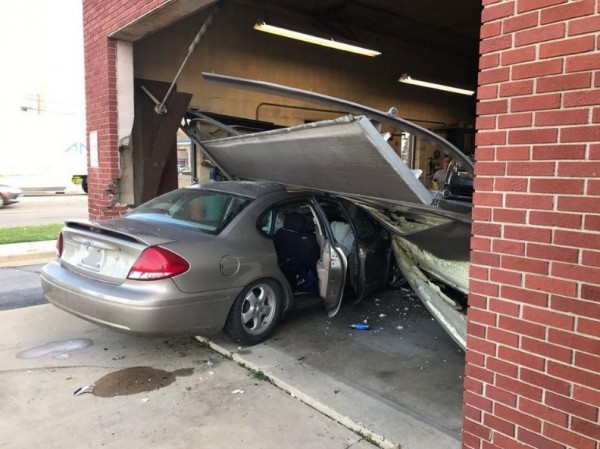 Two people were injured on April 26 when a car left N. Telegraph Rd. and slammed into an auto body shop.

Monroe, MI Police reported the accident occurred around 7:20 a.m. at Monroe Collision Services in the 1200 block of N. Telegraph. Police said the car was being driven in the curb lane when it left the roadway, traveled across the parking lot and crashed into the building.

The impact caused the overhead door to fall onto the car and knocked out several bricks in the building. Monroe Fire and Rescue personnel returned to the scene after a worker was temporarily trapped by the door, but it appeared he was not seriously injured.

Police said the driver of the car suffered serious but non-life-threatening injuries and the teenaged passenger suffered minor injuries. Both were transported to Beaumont Hospital, Trenton. It was not determined why the driver left the road. Alcohol, at this time, does not appear to be a factor.

The accident, which caused significant damage to both the vehicle and the building, remains under investigation. Anyone with information about the crash is asked to contact Officer Jacob Winter at 243-3575.

In a separate accident this morning, an elderly woman was taken to the hospital with head injuries after her car struck the side of a building in the 100 block of S. Monroe St.

Monroe Police reported the victim apparently pressed the car’s gas pedal instead of the brake. The car lurched forward in the parking lot on the east side of Monroe St. and struck the building. There was no serious damage to the building.

We would like to thank Monroe News for reprint permission.