Written by Jessica Lema / The Courier 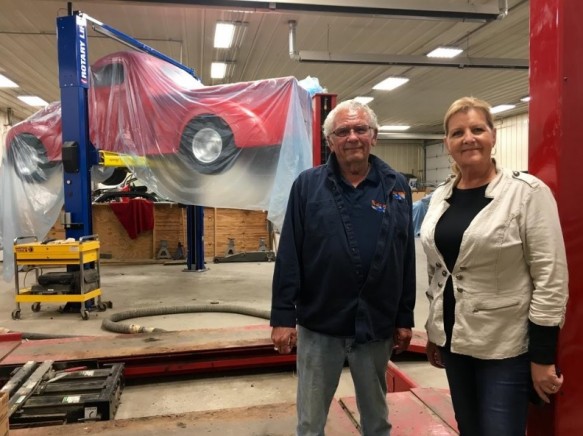 Ray Treuhart (at left) and manager Phyllis White stopped for a photo Friday, April 28 inside the body shop building at Treu Body Works. (Photo by The Courier)

Within one day of the April 19 fire that destroyed a building and injured one employee, the crew at Treu Body Works, in Lincoln, IL was eager to get back to business.

Owner Ray Treuhart said April 21 that auto repair and restoration work has continued, as scheduled, inside the main body shop building, despite the total loss of the company’s paint facility.

“We’re still figuring out how to do the same amount of work with less space, but we’re here, we’re open and we aren’t closing,” he said with a smile.

He said that the company would be at 75-80 percent operational ability by April 24 or 25.

Treuhart noted that the outpourings of support he and his team have received in the last week and a half speak volumes about the character of this community.

“I knew that day that we’d rebuild. I’m not ready to give it up,” Treuhart said.

“Lincoln and Logan County have been really good to me over the years. I’ve had good employees and good customers from the start.”

Treu Body Works Manager Phyllis White said, “We’ve had several folks in the community stop by and bring us lunch, offer their assistance and check on how we’re doing.”

Treuhart added, “Other local business owners have offered storage and man power- anything we need while we rebuild.”

The owner had just left the shop that day when he got a call from his son just after 11:30 a.m. that the business’ paint building was engulfed in flames. At the time, no one knew the cause.

“I was home for maybe 10 minutes before my son called and told me what happened,” he said.

One crewmember, a 45-year-old man, had to be pulled from the flames and suffered severe burns to his arms and face. Firefighters from multiple agencies battled the blaze for over an hour and had to monitor the structure into the evening.

Treuhart said that his employee, whose name will remain unreleased, has been steadily recovering in a Springfield hospital and that he’s shown exceptional strength through the medical procedures that he’s undergone in the last week.

While the burned out remains of the paint facility were still on-site Friday, a new electrical pole had been installed and clean-up work was underway. Treuhart said that the structure would soon be demolished and replaced.

Five vehicles that were parked inside the building were also destroyed, including two vintage trucks that the owner had restored for himself.

Nontheless, Treuhart said that he’s grateful the damage wasn’t more extensive and that no one else was hurt (which is incredible, he said, considering the fact that another painter had gone to lunch shortly before the fire started).

Fire investigators suspect that a malfunction inside a paint-recycling machine was to blame for the blaze.

“If it weren’t for this community, I’d have called it quits and gone on vacation after that,” Treuhart said with a laugh.

The 75-year-old said that he’s been working on cars, tearing them apart and putting them back together, since he was 13 years old. After 24 years of working at Friendly Chevrolet in Springfield, Treuhart decided in 1982 to go into business for himself.

Treu Body Works began in a two-car garage and has since grown into a 12,000-square-foot facility that has built-up and sent out more cool cars than the owner could possibly name in one sitting.

On June 1, the Treu Body Works team will celebrate the business’ 35th anniversary.

“This isn’t the end. We’ve been able to operate mostly as usual in the last few days,” Treuhart said.

“I just want people to know that we’re still going to be in business while we rebuild. We’re not closed, we’re not gone and we won’t be.”

We would like to thank The Courier for reprint permission.