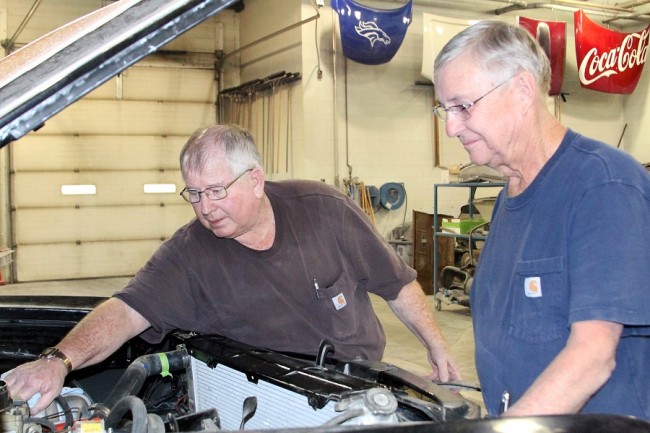 How far would you commute for an education? By the time the current school year is over, Kent Silvester, 66, and LeRoy Musick, 76, will have driven approximately 16,000 miles.

The Imperial men are learning about classic car restoration at Mid-Plains Community College in North Platte, NE. The route they take to get there is 100 miles--one way.

"It's about an hour and 35 minutes unless we have to stop for a train or slow down for deer," said Musick. "Because we're on Mountain Time and the college is on Central Time, we have to leave Imperial around 5 a.m."

They make the drive five days a week, often stopping along the way to pick up donuts for the rest of the class. Despite being time-consuming, the journey is one they always look forward to.

"The Auto Body program is a lot of fun, which is what we're taking it for," said Silvester. "It's common to reach a crossroads after retirement, and start to wonder, 'Do I buy a new recliner, or do I get out and do something?' This program has really helped me keep active."

It's also put him in touch with a lot of new friends with similar interests, such as Musick. The two had been acquaintances for a long time. They met because Silvester used to frequent a restaurant owned by Musick in Imperial, however, it wasn't until last summer that they really bonded over cars.

Silvester had been taking night classes through the college since January of 2016 in an attempt to restore a 1970 Chevelle super sport 454 that had been sitting in his Quonset for 25 years.

"I thought I could fix it up pretty quickly, but the more I got into it, the more damage I found," said Silvester. "The front fenders and rear quarter panels were bad, the wheel wells were rusted and the interior had been destroyed by mice and raccoons."

Realizing the project would take more work than he originally anticipated, Silvester decided to enroll in the Auto Body Technology program full-time in the fall. He then went on the hunt for someone to travel with, both for the company and to split the cost of gas.

Silvester knew Musick liked classic cars because he had seen him at car shows. He also knew Musick had a vehicle he was trying to fix up: a 1941 Mercury Convertible, purchased in pieces out of Missouri.

"When Kent told me about the program at MPCC, I jumped at the chance," said Musick. "I had a heated shop with sandblasters, polishers and welders, but no paint booth. I also didn't have any help, and my knees aren't the best. At the college, if I need to push the car around, someone is there to assist me. It would take me several days to line up that kind of help at home."

For Silvester, the biggest benefit to being in the program has been receiving advice from experienced instructors.

"They bring up ideas I never would have thought of," said Silvester. "They let me make the decisions, but when they offer a suggestion, it's usually for the betterment of the car. I actually feel like I'm making progress now. At home, I just felt like I was spinning my wheels."

Observing the projects of others has been inspirational for the men as well. The program includes a good mix of both traditional students right out of high school and non-trads such as Silvester and Musick.

"All of us have different types of vehicles, so we get to see every kind of hot rod you can imagine," said Silvester. "It's especially fun watching the kids get excited as their projects come together. That energy keeps us old guys going. It's motivational."

The excitement is also also relatable.

"If you have the opportunity to get into a program like this, it's definitely worth it," said Silvester. "If nothing else, for the feeling of self-accomplishment. When you get to take a car that was once a shell, start it up and drive it out of the shop – nothing compares to that."

View the embedded image gallery online at:
https://www.autobodynews.com/index.php/midwestern/item/13044-2-retirees-travel-200-miles-daily-for-ne-auto-body-program.html#sigProId52cd947ac0
More in this category: « NABR Launches VRS Labor Rate Survey in Kansas and Missouri Washington County Body Shops Swamped After I-41 Pileup »
back to top