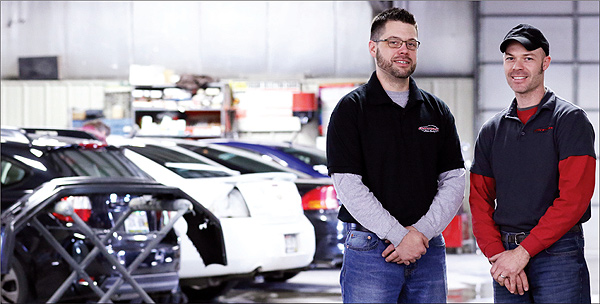 Owners Jason Lisko, left, and Mike Held stand in the garage as vehicles are washed Tuesday morning at Coachwork Auto Body in the town of Addison. (John Ehlke/Daily News)

After more than 35 years, Coachwork Auto Body in Addison, WI has new owners.

In September, Mike Held and Jason Lisko took over ownership of the business at 5709 Highway 33 from Pat and Patricia McIntee.

Held and Lisko have been friends since their Slinger High School days and have a broad background in the auto body repair business.

“I worked for a couple of years for Pat and Patricia early in my life,” Held said. “And we’ve kept in touch ever since--many times through our interest in racing at the Slinger Super Speedway.”

Held had owned Held Auto Body in Hartford and Lisko was still working in the auto body repair business, but they talked and decided to approach the McIntees about possibly purchasing the couple’s long-time Allenton business.

“We heard they were considering retirement,” Lisko said. “We started talking with them and after a little less than two years we were able to work it all out.”

Pat McIntee, 66, said he and his wife decided it was time to sell the business and take some time for themselves.

“Then we had these two approach us and we’re happy we could complete a deal,” Pat said. “We started the business in 1980 in the old brewery building in downtown West Bend and about two or three years later we bought the land for the business’s present location and moved there in late 1982 or early 1983.”

Lisko and Held said the McIntees built a great and successful business, but now they want to take it another step.

“We’re remodeling the building’s interior to help the process flow better and we are making upgrades in technology,” Held said. “We’re going to create a Facebook page and we’ll upgrade the website too. There are new processes and procedures as well as new equipment that will help us.” Shawn Pritchard with Pritchard Home Improvement works on remodeling the inside of Coachwork Auto Body on Tuesday morning in the town of Addison. (John Ehlke/Daily News)

Lisko said the McIntees’ business had gained a reputation of doing quality work and backing up what they did and what they sold.

“We’re going to continue that tradition,” Lisko said. “I think Pat and Patricia felt good about selling to us. I think they are confident we’ll not let them down and will continue to operate with their reputation in mind.”

Held and Lisko have kept the same employees and look to build upon the accomplishments of the McIntees.

“We’ve had customers come in tell us they had great success and confidence in working with the previous owners and we want to continue that relationship so customers will continue coming back,” Held said.

Pat said he wishes Held and Lisko all the luck in the world. Meanwhile, he and his wife will savor their time in retirement.

“I sold my race car, but I have two vintage race cars that I plan on restoring and possibly racing them,” Pat said.

We would like to thank Daily News for reprint permission.

Read 2408 times
More in this category: « GM to Start Autonomous Vehicle Manufacturing, Testing in MI Newell's of Decatur, IL Certified by Assured Performance »
back to top