Not Just for Men: NIC Programs in ID Lead to Role-Breaking Jobs 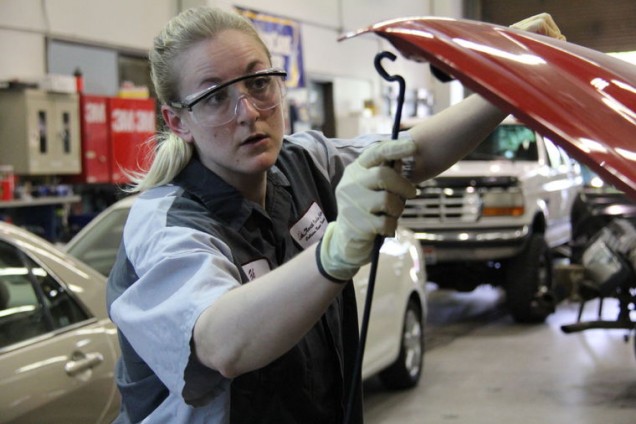 Kyrstyna Zak works on a vehicle in North Idaho College’s Collision Repair Technology program. Zak and other women are finding great jobs in fields that were traditionally dominated by males.

When Krystyna Zak was growing up, her dad was a regular Mr. Fix-It. She used to follow him around in his shop, asking if she could help. Once, he gave her an old radio to take apart, and though she never did manage to put it back together, she enjoyed seeing what it was made of. It was like pulling apart the pieces of a puzzle to see how they fit.

Zak became interested in vehicles when she learned to drive; troubleshooting problems with her car was another puzzle. She even helped out with her friends’ cars. It was a challenge: facing a problem and asking herself, “Can I fix that?”

A part-time job making deliveries in a big truck renewed her interest in vehicles, and in time, Zak found her way to the Collision Repair Technology program at North Idaho College.

“It’s been really cool to learn all these new skills in this industry,” Zak said. “I’ve received a lot of support. I’ve felt very comfortable.”

Zak’s enrollment in the Collision Repair program is notable because she is one of a growing number of female students in traditionally male-dominated programs. This year, female students are enrolled in Collision Repair, Welding, Computer Aided Design, Industrial Mechanic/Millwright and Outdoor Power/Recreational Vehicle programs at NIC.

For a while, when she wanted to change careers, Zak considered becoming a nail technician as an outlet for her creative side. But she said collision repair helps her tap into her creativity as well. NIC’s nine-month Collision Repair Technology program teaches the fundamentals of repairing damaged vehicles. It’s one of a handful of one-year collision repair programs in the Northwest, and the only one in Idaho. Upon completing the program, students emerge as body technicians or auto refinishing technicians (painters).

Wending Jennings is a first-year student in NIC’s Computer Aided Design Technology program. Like Zak, a family connection sparked her interest in the field — her grandfather was a machinist. But she didn’t start out in that line of work.

“I used to do caregiving, but I got kind of tired of the lifting and everything,” Jennings said, describing how she knew it was time for her to find a new career path.

While living in California, Jennings became a certified machinist, a field where only about 5 percent of the workforce are women, according to the U.S. Department of Labor. Later, when she moved back to Idaho, she became interested in computer aided design at NIC.

“I’m kind of used to being around a lot of guys,” Jennings said. “I don’t feel like I’m any lower or higher than them. We’re all here at the same level. We’re all learning the same things.”

Only about 20 percent of CAD technicians are women; at the moment, Jennings is one of just a few women studying computer aided design at NIC. But she hopes that changes soon. In fact, she hopes other female students interested in computer aided design can look to her for direction. Her goal is to continue her education beyond NIC and become a mechanical engineer.

“I would like to help get more women in the field, and try to set an example,” Jennings said. “Like, ‘Look, see… women can do it, too!’ It’s not just a guy thing.”

In 2013, women made up just 2 percent of the collision repair technician workforce, according to the Collision Repair Education Foundation. About 25.4 percent of jobs in the motor vehicle industry are held by women.

Since enrolling at NIC, Zak said she’s learned a lot about her own personality and how to work with others, be they male or female.

“It’s a team effort,” she said. “If there are five guys trying to lift a truck frame, I can be a sixth person and make it lighter… You have to put yourself out there, and it builds confidence. You’re showing that you can do what anybody else does.”

Zak recently won a $1,000 scholarship from Women’s Industry Network (WIN), an organization supporting women in the collision repair industry. Along with the scholarship, she received an all-expense-paid trip to the annual WIN conference in Florida, as well as a slot in WIN’s mentoring program.

“Krystyna [Zak] has been such an inspiration to our Collision Repair Technology program,” said Cal DeHaas, program instructor. “She was without a doubt the respected leader within our team. What sets her apart from others, I believe, is that she genuinely cares about people and always puts others’ needs ahead of her own. Krystyna’s personality is so refreshing and contagious.”

Zak already has a job lined up for when she finishes the program. She’ll work as an estimator for a collision repair shop in Coeur d’Alene, and she’ll also have the opportunity to do some hands-on work in the shop. She’s looking forward to a new career.

“It’s great to know that I can do something totally different from what I’ve done before,” Zak said. “It’s exciting.”

For information about NIC’s Career and Technical Education programs, such as Collision Repair Technology and Computer Aided Design Technology, call (208) 769-3468 or visit www.nic.edu/tech.

We would like to thank cdapress.com for reprint permission.