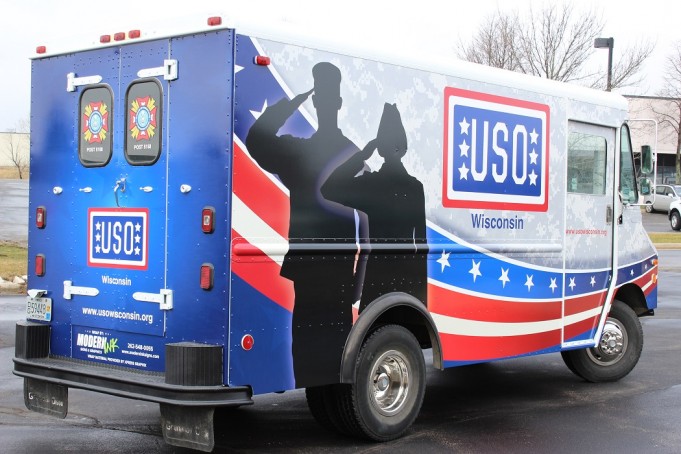 S/S Research Body Shop & Auto Repair Center spent about three months working on the project with the assistance of the local community.

A Wisconsin body shop has transformed an old bread truck into a USO mobile canteen that will serve troops at Fort McCoy Total Force Training Center.

Earlier this year, Kalashian received an email from Dan Toomey, president of the USO of Wisconsin, seeking his help. He asked Kalashian to spruce up a worn out, damaged truck and turn it into a gathering place for service men and women. The goal was to create an information center that would provide snacks and drinks as well as entertainment. The USO of Wisconsin wanted to transform an old bread truck into an information center for servicemen and women.

“Fort McCoy does not really have a terminal to assist our troops,” said Kalashian. “The canteen truck would be able to travel around the airport.”

Kalashian, a Vietnam veteran, is no stranger to working on these types of projects. In 2014, he built a military casket cart for fallen soldiers, which is being used at the Southwest Airlines’ airport in Milwaukee, Wisconsin.

“I asked Dan, ‘Why me?’” said Kalashian. “He replied that they were very impressed with the building and design of the military casket cart that was transformed from an airport baggage cart at not cost to Southwest Airlines.”

Kalashian decided to take on the challenge and do something similar for the USO of Wisconsin.

The USO (United Service Organizations) is a nonprofit, charitable corporation chartered by Congress that offers a variety of programs and services designed to support service members and their families. Every president has been an honorary chairman of the USO since it was established in 1941. “By fundraising in the community and participating in their events and giving back, it bonds us all as one happy family,” said Kalashian. “There’s no limit of what we can do.”

In addition to the help from the local community, Kalashian said that he is very grateful for the support of his boss, Robert Williams, owner of S/S Research Body Shop & Auto Repair.

May 1 marks the Wisconsin shop’s 40th year in business. In addition to collision repair, Williams also runs a full-service department.

“Rich seems to find the projects and then we follow up and put them into the shop and make sure they get done,” said Williams. “We’re very proud of what we do.”

Williams said three of his employees were involved in repainting the green truck white, doing some minor body work and adding chrome wheels. They also manufacturered a removable hitch for the front of the vehicle so a power source could be added. Retired marines put in LED lighting.

“I truly believe that the veterans don’t get enough acknowledgements,” said Williams, who served two years in the Air Force and six years in the Wisconsin National Guard 128th Air Refueling Wing for the Air Force. “I feel it’s my part to try to do as much as I can to help them.”

Kalashian agreed. He served in Vietnam as a platoon sergeant with the 9th infantry division, 3rd battalion 47th infantry from 1968 to 1969 as combat infantry and tunnel rat.

“Some came home and some died in Vietnam—I was one of the lucky ones to survive and carry the memories and share the stories of a war that was unpopular and returning veterans were not welcomed home,” said Kalashian. “I was very bitter for many years, but as the years went by I decided to take my anger and turn it into a positive force by working with the community so that together we can support our troops and veterans and make America great.”