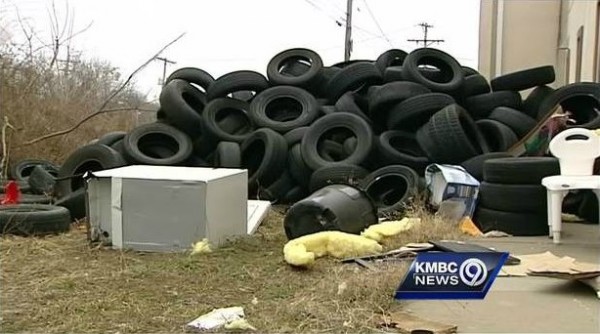 Household garbage and trashed car parts are just some of the junk getting dumped on the city’s east side, including on a church's grounds.

When the Rev. Brendan Mims’ congregation at Greater Metropolitan Church of Christ bought a vacant church two months ago, he never imagined it becoming an illegal dumpsite. His church is becoming one.

“It’s a landfill. It’s a dumping ground and no one cares about it,” said Mims.

A lot of the trash is old car parts. There’s a small mountain of used tires.

Instead of feeding needy families, church money gets spent cleaning the grounds. He said the church was expecting to pay up to $5,000 just to dispose of the tires.

Mims said he tried going to the city for help.

“They said to me, ‘Well, until you occupy the building, there’s nothing we can do to stop it,’” Mims said.

He got dumped on again. Someone abandoned a 90-foot mobile home that will cost thousands to remove.

“I opened the back door and I saw this and I could not believe my eyes,” Mims said.

Rev. Wallace Hartsfield said illegal dumping is a plague on the east side.

“It’s just so much that this is going on,” he said.

Mims is praying for help with the mess.

“This is our home. And we have to clean up our space if we want someone else to take us seriously,” he said.

Hartsfield said people who dump trash need to get back to one basic Biblical lesson.

“Do unto others as you would have them do to you,” he said.

If local body and tire shops are responsible for the dumping, they’re making money off the mess because they charge customers a tire and car part disposal fee.

Community leaders on the east side, including the Kansas City Police Department, are discussing a community-wide cleanup project this spring.

Anyone with information on who is dumping or anyone who’d like to help Greater Metropolitan Church of Christ clean up can send an email to news@kmbc.com

Thank you to KMBC-TV/KMBC.com for reprint permission.