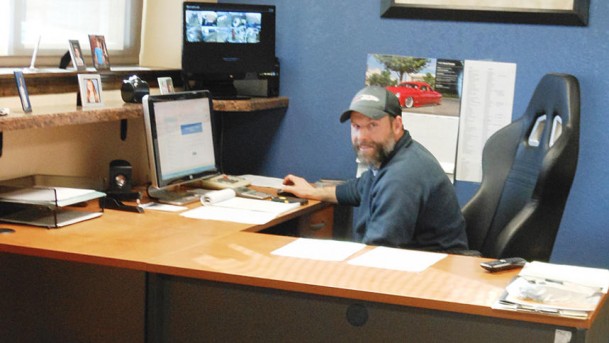 A school bus that encountered a pole sits in the parking lot, awaiting repairs. An oilfield truck, with a brand new hood, sits on the opposite end of the parking lot, ready to be picked up by its owner. And in one of the body shop bays, a pickup that was “jack-knifed into” is in the midst of extensive repairs.

“This is the 21st year we have been doing that,” owner Jay Wanner said. “We are specialists in semis, and we are the only ones who do that. We’ve repaired and restored semis that have been in accidents out on the highway.”

Wanner was born and raised in Dickinson, and after high school he attended Wyoming Tech in Laramie, WY. He returned to Dickinson in 1994 and opened a body shop in the industrial park on the south side of town. That first shop had one 30-foot stall where he did all his repairing, restoring and repainting work.

By 2001, the business had outgrown that one stall and Wanner opened a new shop north of Dickinson, at the junction of Highway 22 and 32nd Street West. The business complex now covers three buildings. The main building houses the offices, and a body shop with five bays. A second building, north of the main building, also has five repair bays. The third building is used for sandblasting, and houses four bays.

Jay R’s staff has grown, along with the physical plant. Thirteen people now work in the shops and offices. Wanner said he has a loyal workforce, and has had little turnover during the oil boom and recent downturn.

“I have not had to let many workers go (due to the downturn),” he said. “Most of the employees are local guys and our guys have stayed around.”

The business provides a variety of services to industries, as well as to individuals. Oil-related industries and agribusiness are the two biggest categories of clients. The oil boom was a blessing to Wanner.

“Oil gave us the ability to do this,” he said. “Oil pointed us in the direction.”

Wanner said there has been no changeover in the services they provide because of the slowdown in the oil business. But they have had to make adjustments.

“Some work we were doing is now non-existent,” he said. “We used to work on fracking equipment, and the fracking just turned off the switch.”

The body shop repairs vehicles that have been damaged in accidents, that have work-related wear and tear, and that need cosmetic touch-ups. It is a full-service body shop. The workers are able to rebuild, restore and repaint anything that is brought into the shop.

Before the vehicles or equipment are repainted, they are often sandblasted. Wanner said the sandblasters do not like to stop in the middle of a project, so their days can last 14 to 15 hours.

There is even a 50-foot-long paint booth, completely equipped to handle big equipment. Wanner said they use a forklift to move the larger vehicles and equipment into the repair bays.

One of the bigger pieces of equipment they have dealt with is a backhoe that was damaged on the job. Its hoe was crashed into a wall numerous times during a job, and needed repairs and repainting.

“We had to repaint the whole thing, to make the paint match,” Wanner said.

When the shop first opened, they did a lot of automobile restorations. But with the oil boom, the focus of the business has shifted more toward heavy equipment.

Now, instead of restoring entire automobiles, they sandblast and repaint car and truck parts for do-it-yourselfers who need a little help.

Greg Stephens does body work and painting at Jay R’s. He has been working on the “jack-knifed into” pickup. He estimates the job will take 60 hours to complete. But his eight-hour days are not comprised of working straight through on a single vehicle, because it takes time for repair work to set and for paint to dry. A semi truck repaired recently took more than 170 hours to complete.

“This is what we do,” Wanner said. “The really big projects are our forte.”

Vehicles aren’t the only things Wanner has been called upon to sandblast and repaint. He has restored antique beds, lawn furniture and cream cans. He was even asked to clean and paint antique toy shovels.

“The cream cans and those antique shovels were the weirdest things we’ve worked on,” he said.

Tank coating is another service that Jay R’s offers. They spray a protective epoxy coating on the inside of tanks that are used in the oil industry. Crude oil and salt water are especially corrosive, so the coating is essential to extend the life of the tanks.

In addition to coating the inside of industrial tanks, the shop can put foam insulation into the tanks. There’s also a mobile unit which is used to go out to new construction sites, and “shoot in” foam insulation. Wanner said the foam insulation workers usually work straight through on a job, sometimes taking up to 15 hours to complete the task.

For many years, Wanner’s mother was his office manager. But she retired two-and-a-half years ago and Amy Tysver was hired as her replacement.

“It was fine with mom when there were four guys here,” he said. “Then the crew grew, so we hired Amy.”

Tysver works as the office manager and bookkeeper, and she also manages the employees.

“I wrangle the boys,” Tysver said, “I was a farm girl, so I can handle them.”

Wanner is not sure what the future will bring for his business.

Jay R’s has grown, along with other industries in southwest North Dakota. He continues to work with many of those new industries, as well as with long-standing businesses and farmers in the area.

Thank you to The Dickinson Press for permission to reprint this article.