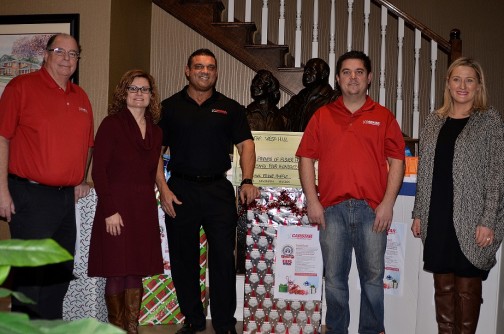 The CARSTAR Chicagoland Business Group has had a long history of supporting the Edward Hines Jr. VA Hospital Fisher House in Hines, IL. For the fifth consecutive year, the 17 individual Chicago area CARSTAR locations have joined together to collect both money and hard goods for the charity.

For this year’s donation drive, CARSTAR partnered with local country music station, U.S. 99 to promote the drive, which began during the November Military Month. Donation bins were placed in all the participating shops along with a Fisher House Wish List. Cash donations exceeding $2,000 were raised along with 12 bins of food and much needed supplies.

“The Hines Fisher House does so much every day for our veterans and their families,” said Louie Santiago, marketing specialist for the CARSTAR Chicagoland Business Group. “It’s an honor for us to be able to help out every chance we get.”

Recognition goes out to CARSTAR West-Hill, who refurbished a fully operational 1930's General Electric Refrigerator, which was raffled off to raise $1,400 for the Fisher House. The refrigerator was given a Chicago Blackhawks theme. The majority of raffle tickets were sold at the CARSTAR West-Hill Christmas Party.

Special thanks also go out to the following locations:

Hines Fisher House opened its doors on March 1, 2010 and has provided accommodations to over 3,000 guests. A Fisher House is “a home away from home” for family members, caregivers or loved ones of patients receiving medical care at major military and VA medical centers. It is a temporary residence and is not a treatment facility, hospice or counseling center. By law, there is no charge for any family to stay at a Fisher House operated by the Department of Veterans Affairs.