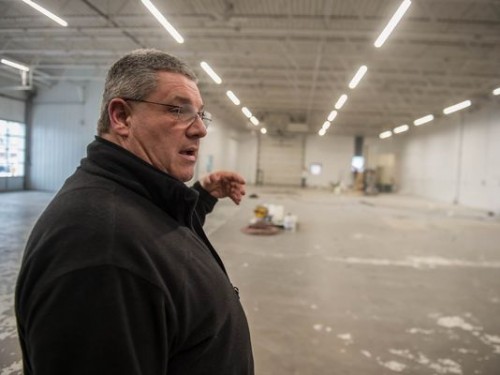 Kent Love, new bodyshop manager at Lakeview Ford shows where some of the new equipment will go

Kent Love sits in a temporary office adjacent to the sales floor at Battle Creek's Lakeview Ford Lincoln dealership on West Dickman Road. The Charlotte native doesn't want to sell you a car though, and he's certainly not interested in selling you the one you already have.

An insurance claims adjuster turned body shop administrator, Love was hired in November to manage the dealership's new auto body and paint operation. Love, 53, was chosen by the dealership's owner, Vince Pavone, to oversee the construction and renovation of the space formerly leased by Skokie, Ill.-based Gerber Collision & Glass.

Gerber vacated the space earlier this year. Rather than lose the body shop arm of the business, Pavone doubled down with an investment of about $250,000 to build a Ford-certified body shop at the dealership. That includes a paint booth and vehicle hoist, welding and aluminum equipment, new lighting and an epoxy floor finish. That expenditure, however, does not include an additional six-figure price tag for the installation of an additional paint booth, to be installed by the end of the year.

The operation opens Monday with construction slated for completion sometime in February.

Pavone said the decision to build a new collision center was a difficult one, given the size of the investment and the additional requirements to make it a reality. The most challenging part, he said, was finding a manager to fall in line with the dealership's culture -- that is, until he interviewed Love.

"What we saw in Kent is a committed collision center person who had tremendous expertise," Pavone said. "We saw a person who’s a leader in Charlotte and Lansing in terms of what he’s able to do in the body shop business in advancing different goals.

"We also saw somebody who's community-minded in making investments on his own in Charlotte and Lansing."

Love already has hired one body man and one painter and plans to bring on several others in the not-too-distant future. He said there already are a number of body shops -- both good and bad -- in the Battle Creek area, but he said there's enough business to go around, especially if jobs are done well.

In a business with its share of frustrated customers, many coming on the heels of a vehicle crash, Love said he expects perfection from his technicians, and he's already offered it as a challenge to interviewees.

"I’m finicky when it comes to my technicians -- I want perfection," he said. "I understand they’re not perfect and I am far from perfect, but that’s what I want on the bottom line. If you’re my customer, you come in and you’ve paid a lot of money for that vehicle and you want it back to the pre-existed condition.

It's a crowded market with options spanning dealerships and individual shops in Battle Creek, Marshall and Kalamazoo. That competition will especially be the case for Pavone's new body shop, tucked in among multiple other options on Battle Creek's Motor Mile.

There's also no shortage of work in the auto body industry. The state reported 4,688 vehicle crashes in Calhoun County in 2014, more than 80 percent of which caused property damage to the vehicle. That figure does not include bumps and bruises -- largely cosmetic issues -- incurred in day-to-day travel.

Love said he embraces the challenge. He said he's given this new venture a great deal of thought, often bringing aspects of his job home with him -- mainly, he said, because he enjoys the work.

"I love satisfaction and I love a challenge and that's the main reason I took this job," he said. "Just what I felt from Vince explaining what he was looking for excited me. Yeah, we all get in a rut in our jobs, but I love a challenge. This is definitely going to be a challenge for a couple of years at least."

We would like to thank Battle Creek Inquirer for reprint permission.