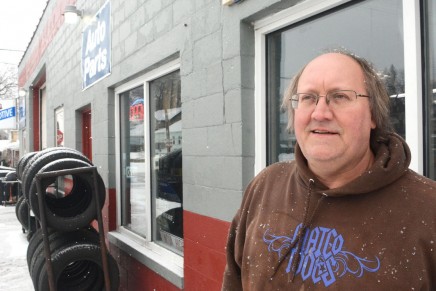 These days, Gruber Automotive at 208 E. Edgwater St. in Portage, is on the edge of a construction site, but it's excluded from the current deolition to make way for new Columbia County buildings, because the county and owner John Gruber haven't come to an agreement on price. Meanwhile, Gruber says, his shop remains open and busy. Photo: Lyn Jerde, Daily Register

John Gruber’s immediate problem is making sure that his customers can get to his garage via streets that will soon be crowded with flatbeds and backhoes.

His long-term problem: Finding a place to relocate Gruber’s Automotive, and getting enough money from Columbia County to start all over again someplace else — preferably within the county’s borders.

Pausing during a busy workday — he said he’d had about 20 customers before 10 a.m. on January 13 — Gruber reflected on the uncertain future for the business that he’s owned and operated at 208 E. Edgewater St. in Portage, Wisconsin since 1984.

“If I have no place to go,” he said, “then I have to go outside the city, and I lose my customer base.”

Columbia County wants to buy the Gruber’s Automotive property to make way for a three-story administration building and a two-story Health and Human Services building, to be constructed on opposite sides of the Portage Canal.

Demolition of the canal-side buildings that the county has acquired started in January, with Robinson Brothers of Waunakee handling the razing.

On late morning January 13, a backhoe was taking huge bites out of a long-vacant lumber yard on the canal’s north side. And Steve’s Auto Body on DeWitt Street — the building where Gruber said he worked before moving to his current location in 1984 — is now a pile of concrete blocks and rebar.

Gruber said he’s OK with selling his property to the county. He’s even OK with having his service bays converted for use as a shop for the county’s Building and Grounds Department, once the new administration building is completed in the spring of 2017.

But what the county offered him, he said, isn’t nearly enough to pay for setting up a comparable business somewhere else.

“That wouldn’t get me out of here,” he said.

However, Gruber said, it would cost him $500,000 or more to move the business elsewhere, for land and for a facility of comparable quality to the existing garage and retail store.

Gruber said he wasn’t represented by a lawyer during his first negotiation sessions with Portage Attorney John Miller, whom the county had retained to oversee the purchase of property for the county’s $45.41 million building project, which also includes renovating the courthouse for court-related use only.

He also was not represented, he said, during initial talks with Mark Hazelbaker, whom the county hired after the County Board voted in June 2015 to begin eminent domain proceedings to acquire Gruber’s property and that of his neighbors, Big Chicken antique store owners Joe and Nancy Bonin.

Since then, however, the Minneapolis-based firm of Biersdorf and Associates, which touts a specialty in eminent domain cases, solicited and got Gruber’s business.

Biersdorf and Associates attorney Ryan Simatic could not be reached for comment on January 13.

Miller said, however, that the offer made to Gruber exceeds the value determined by an appraiser that the county hired.

Also, he said, the county would reimburse Gruber for moving expenses, in addition to the price that would be paid for the property. However, he noted, allowable “moving” expenses do not encompass the cost of erecting a new building.

Gruber said he has hired an independent appraiser, as is the right of property owners who are targeted for eminent domain.

His original plans to move the business to 1000 Jefferson St. were thwarted in October 2015, when the city of Portage’s Plan Commission voted against giving him a conditional use permit. Commission Member Carolyn Hamre said, at the time, that the site would not be suitable for Gruber’s business — a contention he disputes, citing a decades-old state certificate in which the property was described as “industrial.”

At age 56, Gruber said, he’s not ready to give up his business. He’s willing to sell his current location, provided that he can get enough compensation for it to start over somewhere else.

He said he’s looked at other properties in Columbia County that might be suitable, but their asking prices exceed what the county is offering him, and none of them are in move-in condition.

Meanwhile, Gruber said, he and his two employees are trying to do business as usual, even as the chain-link fence marking the construction area goes up all around him.

Gruber said he’s concerned about the safety of customers who would have to share the roads, in the coming days, with heavy equipment.

And all the time, he said, they’re asking him what’s going to happen to his business, and he tells them he doesn’t know.

Joe Bonin, on the other hand, said he might be close to a deal with the county to sell the Big Chicken property.

On January 13 — while a tall crane was taking down the metal tower from the 154-year-old feed mill that is being dismantled, piece by piece, on the property — Bonin said he has verbally accepted an offer from the county, but has yet to see paperwork formalizing the offer and its conditions.

When that happens, Bonin said, he can close the deal for a new Big Chicken location outside of Portage, for which he made an offer conditioned on a successful transaction with Columbia County.

“All I’m waiting for,” Bonin said, “is for the county to come here with a check.”

Thank you to Portage Daily Register for permission to reprint this article.