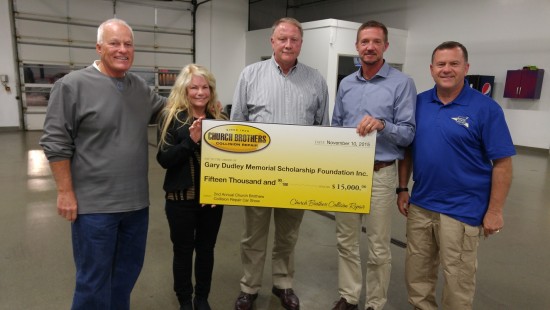 Nearly 170 vehicles representing a wide range of makes, models and years participated in the event on August 29 at the Church Brothers’ Shadeland Avenue shop on Indianapolis’ eastside. All car show proceeds were matched by Church Brothers Collision Repair to bring the total to $15,000.

The Gary Dudley Memorial Scholarship Foundation honors the late Gary Dudley, an Indiana State Police lieutenant. Dudley was killed in August 2006 while participating in a charity bicycle ride for the Indiana Chapter of Concerns of Police Survivors (COPS). The foundation, established by his widow, Carolyn, awards college scholarships to children of Indiana law enforcement officers killed in the line of duty. To date, nearly $200,000 has been awarded.

In addition to receiving this year’s contribution, the Dudley Foundation has been named the permanent beneficiary of future Church Brothers’ car shows.

The 3rd annual Church Brothers Collision Repair Car Show is expected to take place in early June 2016, again at the Shadeland Avenue shop. Information about the event will be posted at www.church-brothers.com and on the Church Brothers’ Facebook page as details become available.

Church Brothers Collision Repair, founded in Indianapolis in 1929, is family-owned and operated. It currently has six shops in the metro Indianapolis area.