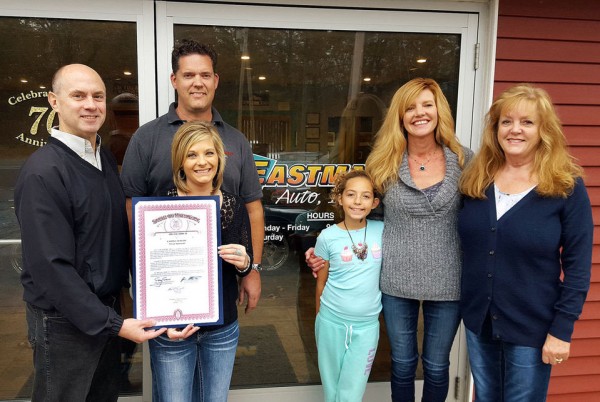 Rich Eastman poses with Rep. Gary Glenn, left, along with others after receiving a State of Michigan certificate celebrating Eastman Auto's 70th anniversary.

The year was 1945, World War II was just wrapping up, the Detroit Tigers defeated the Chicago Cubs to win the World Series and a patent was issued for the microwave oven. It was also the year when a new body shopped opened, Dick’s Body Shop. Now 70 years and three generations later, that body shop is still servicing area customers as Eastman Auto Inc.

“Our success is in our stability and doing the same thing over and over,” said Eastman Auto Inc. owner Rich Eastman. “We have pretty much the same customers. We’ve always been here, so people know where we are.”

“We sold guns back then. We also did welding and we’ve always done auto repair,” Rich Eastman said. “We’ve always had the salvage yard and sold used cars.”

Around 1950, the name was switched to Eastman Auto and a move was made to the present location at 1790 S. Meridian Road, just south of Gordonville. Richard Eastman Sr. ran the business until 1985, when Rich’s dad, Dick, took over.

There may be a fourth generation Eastman taking over in the future, but it won’t be a Richard, Dick or Rich. Rich’s son, Mark, who is serving in the U.S. Air Force, is scheduled to return to the family business, which also includes Rich’s uncle, Don Curtis.

Just three years ago, one of those memories was not pleasant as the business went through a devastating fire that destroyed the main building.

“I don’t think you ever get back there and recover. You have 70 years worth of build up and then all of a sudden it is gone,” Rich said. “We’re just now getting it built back. That was the bad thing about the building burning, I knew every nook and cranny and where stuff was. It’s nice to have a new building, but you miss the history.”

We would like to thank Midland Daily News for reprint permission.