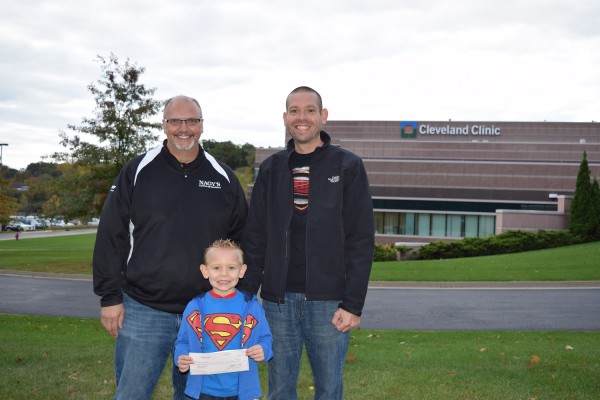 Nagy’s Collision Centers in Ohio is giving back with a donation of $250 to the Cleveland Clinic Children’s Oncology Group.

Nagy’s donated $10 for every deer-damaged vehicle repaired throughout the month of September to the Cleveland Clinic in honor of six-year-old Carson Tate, the son of Thom (manager at Nagy’s Power Sports) and Tera Tate, who is courageously battling Acute Lymphoblastic Leukemia.

“It’s great to see Carson excited to be part of helping children like himself in the fight to end childhood cancer. He is definitely the Superhero of this company!” said Owner, Ron Nagy.

Nagy’s 2015 deer hit campaign ‘Hit a Buck, Donate some Doe’ runs from September through December, with donations focusing on a different charity each month. Each customer who has their vehicle damaged in a deer hit and has it repaired at any of Nagy’s locations receives a t-shirt for being part of the donation—highlighting the good out of an unfortunate situation for the vehicle owner. “We are so thankful to everyone who has participated in our deer hit campaign so far,” said Marketing Manager, Maria Hostetler.

For five years, Nagy’s Collision Centers has had a deer hit contest where the customers were tracked and put in a lottery for prizes. Nagy’s decided this year to further develop the contest into a campaign to give back. October donations will be given to the Breast Cancer Research Foundation.

Nagy’s Collision Centers has locations in Ashland, Doylestown, Green, Hartville, Orrville, Millersburg, Wadsworth and Wooster. Nagy’s offers services such as Autowatch, an online viewing of repairs being completed and e-Estimates so customers can get an estimate without leaving their home or office.