As a paramedic for Ottumwa Regional Health Center in Ottumwa, IA, Steve West, age 74, could be one of the oldest active emergency medical technicians in Iowa. For the past 34 years, he has been saving lives three days a week. He spends the remainder of the week restoring classic cars at his small body shop. 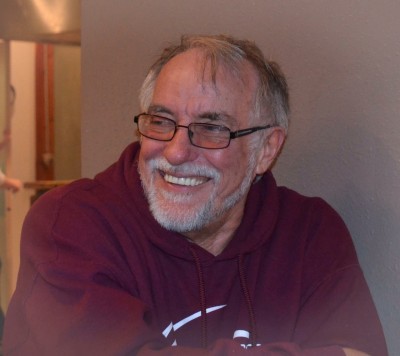 Steve West, 74, is a paramedic for Ottumwa Regional Health Center in Ottumwa, IA who also owns a small body shop where he restores classic cars. He is likely the oldest emergency medical technician in the state of Iowa.

After working at body shops as a teenager, West decided to go back to school and become a certified paramedic to serve the community and make a difference.

“My brother died in a car accident many years ago, and I have always wondered if things could have been different if someone with this kind of training had been present,” West said. “We work with people in emergency situations and in many cases they are lives on the line. Being able to make a personal connection to patients quickly is important to build trust and be able to help them.”

West encounters people all the time who are grateful for his role as one of Ottumwa’s four paramedics.

“I’ve saved a few lives over the years and I see some of them here in town, which is obviously satisfying,” he said. “There are only 40,000 people here in Ottumwa, so it’s not a big place. One man had no pulse and we brought him back and then later he thanked me personally. It meant a lot.”

West is proud of both of his jobs and what he has achieved in his life.

“I’ve been painting cars my entire life pretty much and I worked for numerous shops around here over the years. I’ve painted murals and worked on some amazing vehicles and I still have a passion for it. Being able to balance both jobs, as a body shop guy and a paramedic—it’s a great life and I would not change it for the world.”

Today, West runs a small car restoration company called Colorgraphics, located in Blakesburg, IA, 20 miles outside of Ottumwa, where he does just everything except mechanical repair and upholstery. “I can do the entire car or sub out different aspects of the restoration. I really enjoy doing the graphics; using multiple colors and spraying PPG.”

Some of West’s restorations and paint jobs have appeared in national magazines and he’s had a few celebrity clients over the years too, he said. “I’ve done some really classic cars and right now I am working on a 1968 Ford Mustang. A few years ago, I did a few vehicles for local drag racer Tommy Johnson, Sr. and he was great to work with.”

West’s work schedule as a paramedic allows him to take off four days every week, which gives him ample time to restore cars and make a few repairs, on occasion. “I work 7 am to 7 pm three days every week as a paramedic and then I use the other four days to work on cars,” West said. “It works out well, because I can get into a job and I don’t have to start and stop.”

Tom’s wife Peggy is also a paramedic, so they work a lot together.

“We work in teams of two and Peggy is usually working with me. It’s nice, because we get along well and enjoy working with each other.”

West has seen a few shootings and serious car accidents, but he is happy to say that fatal collisions are less frequent than when he started.

“More and more people walk away, primarily because of the fact that these newer cars are so much safer than say a decade ago,” West said. “Most of the accidents we see now are not critical and that’s a major deal. Our job is to help people and save their lives, so fatalities are something we want to avoid for obvious reasons. No one wants anyone to die on your shift, that’s sure.”

Eight years ago, West got a scare when he found out that he had cancer. But today he is cancer-free and has no plans to retire. “It was a lucky thing, because the hospital gives us a complete physical every year as one of the requirements of the job and in 2007, they found prostate cancer just in time. Some people have told me that I probably built up some good karma working as a paramedic, and maybe that is true, who knows?”

A large number of all the car accident calls that West and Peggy respond to are often deer-related, he said. “Iowa has a lot of deer and that’s why we’re number four in the country when it comes to accidents involving deer. They’re like cattle, but they move faster and they don’t look both ways before they cross the road.”

Doing restorations when he isn’t saving lives at a paramedic is a nice situation for West. While most people are already retired or considering it, West is happy to be right where he is.

What does the future hold for West?

“I may cut back my paramedic schedule when I turn 75, but really I have no plans to retire completely,” he said. “I love helping people and I know I can work on cars as long as I want, so why change anything. Many people don’t like their jobs, but I have two and I like them both... a lot!”