Alton auto repair shop owners Edgar and Ignacio Lopez’s grandfather, Macario Lopez of Jalisco, Mexico, left his home country on a bus sent by the Alton-based Illinois Glass Company in 1911 at the age of 15.

“I can’t imagine having the courage to do that,” said Edgar, who, with his brother and business partner, Ignacio, brought their auto repair business, Transcar, 3474 E. Broadway, back to Alton recently. 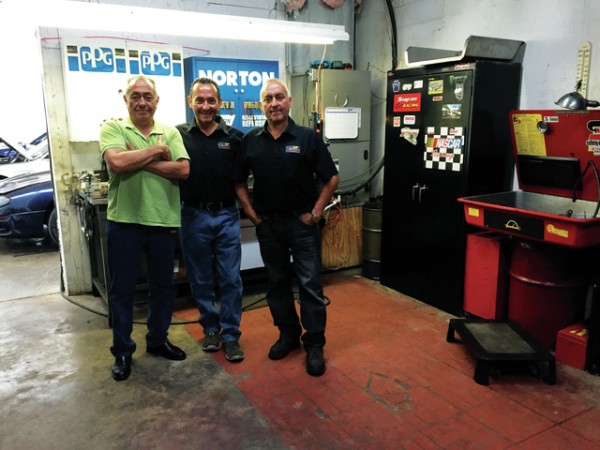 Their grandfather would spend the next 56 years working for Illinois Glass, which was founded in 1873 and merged with the Owens Bottle Company in 1929.

Over a century after Macario immigrated to the U.S., many members of the Lopez family, including Edgar and Ignacio, still live and work in Alton.

The brothers have been in the auto repair industry for over 30 years, and say their family’s long history of hard work inspires them to succeed in business.

Macario Lopez married Lydia Easton, a British woman he met in Alton. After some years living in Alton, they returned to Mexico with their three sons, American citizens by birth. Due to what Macario’s grandson Edgar described as life circumstances, the couple left their children in Mexico City with Macario’s family, who were crippled by poverty.

Their sons became homeless. One of them, Rito, died of starvation. Roberto (father of Edgar and Ignacio) and Martin were unofficially adopted by humanitarians living in Mexico City, and were gradually lifted out of poverty. Martin moved to the U.S. to work for the Owens Bottle Company in Alton with his father, but Roberto married a woman, Alicia, whose mother made him promise to stay in Mexico City.

Stay in Mexico City he, his wife and children did, but only until 1979, when the whole family, including Edgar, Ignacio and five other children, returned to the U.S. After some paperwork, the kids became citizens. The family lived in several states, including Texas, Tennessee and Nebraska before settling in Alton.

Today, Edgar and Ignacio call Alton home. They say their grandfather’s journey to the bluff city on the river was “the best thing that ever happened” to them.

“We were always the new kids on the block,” Edgar said. “We learned different cultures. We learned to be open and receptive.”

Facing discrimination, founding a businessDespite their parents teaching them and their siblings to be “good workers, open, respectful, clean and happy” people, and Edgar and Ignacio say they’re proud of that. They also said there were times when they faced discrimination because of their appearance and ethnicity.

“We came here to work and live in this country,” Igancio said in a soft tone. “But people require more from us. We have to provide 100 percent perfection. We just try to be good people and work hard, and we thank God everyday. Americans don’t know what they have here.”

Despite the hurdles, the brothers said they would encourage other immigrants to try to start their own businesses.

“Don’t be afraid to jump in and break barriers,” Edgar said. “Just take that first step. It will be the first step in a long journey.”

For the past five years, the brother duo operated their auto repair business, Global Transitions, in Granite City. Previously, they worked under the name Cobra Transmissions in Alton, and before that, C and N Transmissions in Jerseyville.In their years of business, they have contracted with the cities of Alton and Granite City to repair city vehicles.

“I think people are trusting of us because of that. It’s a goal of mine to contract with the city again,” said Edgar.

Their new 3474 E. Broadway is an upgrade in both size and location. Andy’s Auto Body, located lower on the hill, brings in business to their new location. The brothers also say they are bringing customers from Granite City.

Transcar specialized in repairing automatic transmissions, one of the few shops in the area to do so. Along with their three employees, the Lopezes say they have “knowledge and strength” in their trade. They will work on both foreign and domestic transmissions, and can also work with exotic, racing and diesel engines. They perform non-transmission repairs, as well, including electrical, air conditioning and heating and engine work.

The duo worked previously for franchise auto care businesses, but eventually decided to go back into business for themselves.

“We’ve been in business for so long, throughout that time, we have worked for different people we always come back to operating for ourselves. And it becomes more rewarding when you’re able to employ people and help them keep a job,” Edgar said.

Transcar occupies more than 3,000 square feet, a space that includes two large bays for trucks, two smaller for medium and large vehicles, an office, and space for transmission rebuilding and small repairs.

We would like to thank The Telegraph for reprint permission.