In the days leading up to the discovery of Ronald Dean Randall’s body in a wooded area near Washburn nearly a year ago, police had been receiving tips about AJT Auto Repair shop on Black Hawk Street, officers said at a court hearing August 13.An informant told an officer with the Tri-County Drug Enforcement Task Force someone was selling methamphetamine at the shop. Other officers were investigating a missing persons report concerning Randall and received information Randall had been shot at the business. 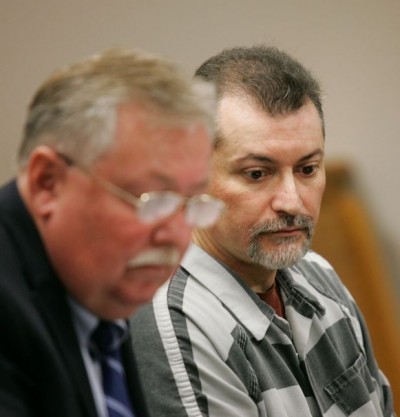 The shop’s owner, 44-year-old Anthony Tronca, is charged with first-degree murder in Randall’s death. Authorities believe Randall died Sept. 2, but his body wasn’t discovered until Sept. 12.On Thursday, Tronca’s attorney, Michael Bandy, asked the court to suppress evidence -- which apparently included a handgun found in a backpack – that police seized after they stopped an Oldsmobile Tronca was driving Sept. 11.

Bandy argued the police seizure of the vehicle was unconstitutional. He cited a recent U.S. Supreme Court decision that held a Nebraska seizure was illegal because officers detained a motorist for seven or eight minutes to allow a drug dog to conduct a sniff test on a vehicle.

Judge Todd Geer will rule on the matter at a later date.During the hearing, Waterloo officers detailed parts of the investigation that led to the traffic stop.Investigator Jeff Tyler with the Waterloo Police Department said a woman had reported Randall missing and said she heard something had happened to him.While the investigation was building, two other police officers, unaware of the missing persons investigation or that Randall was dead, visited AJT Auto Repair trying to find Curtis Rademacher, who was wanted for a parole violation.

Tyler said the “dead body” line is something commonly used by police to assure people they won’t get in trouble for minor offenses when helping officers who are looking for wanted persons or investigating serious crimes.

“Anything about that line from (the officer) where he was actually aware there may be a dead body in the shop of AJT Auto at that time?” Assistant County Attorney Brad Walz asked.“No,” Tyler answered. He said Rademacher’s name later came up in the missing person investigation.

Meanwhile, Officer Joe Zubak with the drug task force on Sept. 11 received information from an informant Rademacher was going to a home on Bellefontaine Street in Evansdale and Tronca was with him. Officers set up surveillance around the house. They watched an Oldsmobile with two men pull away and stopped the vehicle after it entered Waterloo.

Tronca was driving, and Rademacher was the passenger. Rademacher was arrested on the parole warrant. At the police station he requested an ambulance because he had swallowed a large amount of meth and his head and arm were starting to hurt, said Investigator Brice Lippert.

Tronca was arrested for driving while suspended and later released on a promise to appear.Officers said they impounded the Oldsmobile because both people in the car had been arrested and there was no one to turn it over to. A police K-9 alerted to the odor of drugs on the rear driver’s side door, said Sgt. Steve Bose. Officers then applied for a warrant to search the vehicle.

We would like to thank WCFCourier.com for reprint permission.