By pooling their resources and working together in a team environment, 11 car dealerships formed the Midwest Parts Group; a cooperative that delivers mechanical and collision parts to portions of three states—Eastern Kansas, Northwest Missouri and Southwest Nebraska.

The huge territory, with 4,000 shops, fleets and municipalities that the group serves, are often located far apart, but by devising a plan where every member plays a pivotal role and shares the load, the group excels while benefitting the members and ultimately their customers. 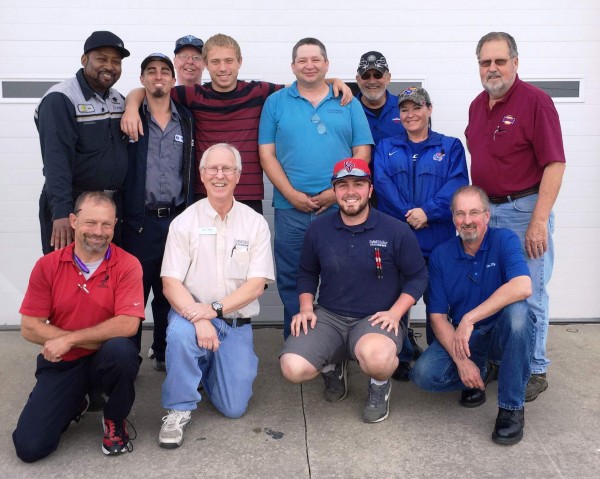 The backbone of the Midwest Parts Group is its highly-skilled and extremely friendly truck drivers, who know their routes and body shop customers inside and out.

To represent the Midwest Parts Group out in the field, all of the outside sales are skillfully handled by Tony Harris. He logs a lot of miles traveling to shops in three states and that’s why he knows what his customers’ parts and delivery needs are inside and out.

Having drivers that know their routes like the back of their hands gives the group an additional level of customer service that really helps, Harris explained.“The group has nine trucks that are dedicated to the group, seven of which are from dealers in the program and two that we contract, and it works very well. Our drivers are a big part of the team, because they don’t just drop off parts. They make sure the orders are right and they constantly communicate with the shops. We have very low turnover with our drivers and that helps, because our customers don’t want a different driver every time, and that’s how we build strong relationships with the shop. After working with a shop for a period of time, the drivers become familiar with their routes, they get better at deliveries and it improves the entire process.”

It’s pretty basic--parts delivered on-time and orders that are complete and accurate, according to Harris. “That’s it. Getting the right parts in the right hands at the right time is the bread and butter of this industry. Shops are always focusing on cycle times and the wrong part can really impact their production, so we focus on being accurate and accountable. Shops want a reliable source that they can count on again and again and with this group, that’s what we get. When I talk to a body shop owner, I can assure him that we will do exactly what we say, so that he can get that peace of mind. With so many different things going on in a body shop, they shouldn’t have to be worrying about their parts. We take all of that drama right out of the equation with the Midwest Parts Group.”

Ryan Branam is the parts manager at Lewis Toyota in Topeka, KS and a member of the Midwest Parts Group. His dealership has been involved with the Midwest Parts Group since its inception in 2006, so he has seen the group as it has evolved. It saves his department by sharing routes and enables him to provide seamless service to all of his customers.

“By sharing deliveries, we’re saving a ton,” Branam said. “Without the group, I would have eight other routes that I would have to do, which means I’d need more trucks and more drivers. The group is saving all of us money which means we’re able to pass some of those savings onto our customers. In the end, they’re getting better pricing as a result.”

“If we can make the process as easy as it can be for the shops to get their part, that gives us an obvious advantage,” Branam said. “We’re out there competing with every other Toyota dealer in our delivery area, so how can we be different? The advantages we can get through our participation in the Midwest Parts Group set us apart in many ways.”

Ken Bruns is the parts manager at Laird Noller Ford in Topeka, KS and also one of the original members of the Midwest Parts Group. With 11 car dealerships working closely together, the group has been able to flourish, while similar delivery cooperatives in other parts of the country haven’t succeeded. “Yes, all of the manufacturers represented in the group are of course competitors, but we’ve figured out how to work well together because our ultimate goal is providing good service and getting the shops the parts they need when they need them. We’re equal partners and we know that we’re stronger as a unit, because we can cover more territory more effectively.”

Together, the members of the Midwest Parts Group deliver more than $1 million in parts every month combined, so it’s a fairly large undertaking. “Logistically, it’s a big operation, but we’ve got it down to a science,” Bruns said. “We’ve established a reputation for being reliable and adding that personal touch to it as well and we’ve proven ourselves by coming through time and time again.”