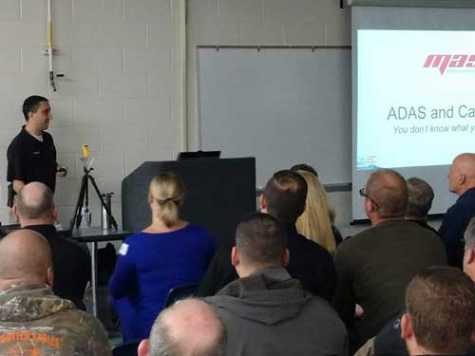 On Oct. 24, ASA-MI hosted a training session titled “ADAS and Calibration – You Don’t Know What You Don’t Know” in Grand Rapids, MI.

The meeting was attended by more than 70 automotive industry professionals working in both collision and mechanical repair.

According to ASA-MI President Ray Fisher, “Our objective was to create awareness about these newer safety systems and take away the fear of the unknown. These systems have been available on vehicles for the past few years and are no longer restricted to the high-end or high-dollar vehicles.

“As I mentioned when I opened the class, if you look at the data from the Insurance Institute for Highway Safety (IIHS), you’ll see that traffic fatalities in the United States in 2005 resulted in 43,443 deaths. By 2011, we reduced the number of deaths annually to 32,367, but by 2016, the latest year for the data, traffic fatalities rose to 37,461! Another article titled 'Real-World Benefits of Crash Avoidance Technologies,' published in May of this year, shows double-digit decreases in injuries using this technology---a very positive outcome. An article from 2013 showed that by reducing the speed of impact for two vehicles that were sampled, damage still occurred, but the repair costs were reduced from over $28,000 to less than $6,000, while ultimately reducing injury. Moving forward, many of these crash avoidance technologies will be standard equipment and definitely crucial to the success of autonomous vehicles, resulting in decreased total losses and personal injury and increased volumes for repairable vehicles. Since we know they are not going to go away, nor should they, we feel it is important to educate our automotive repair professionals here in Michigan.”

Before introducing the evening’s guest speakers, Fisher provided a brief overview of the Motor Vehicle Service and Repair Act. The act requires repair facilities and technicians to be licensed to demonstrate that the state legally sees them as the experts in the repair process.