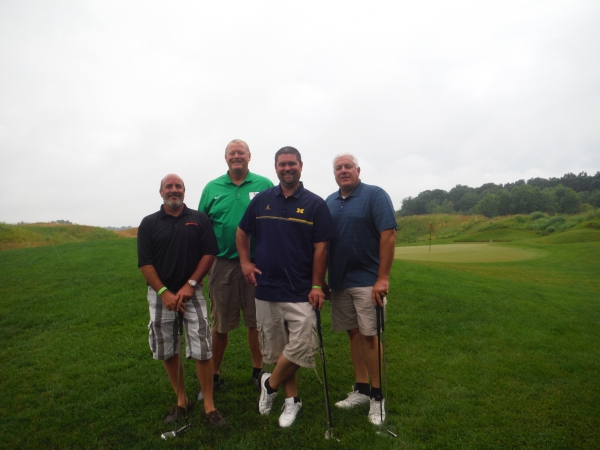 On July 10, ASA-MI held its 32nd Annual Golf Outing at the Eagle Eye Golf Course in East Lansing, MI, with 84 industry professionals in attendance. The weather was less cooperative than preferable.

ASA-MI Ray Fisher joked, “We had beautiful sunny days leading up to the outing and beautiful sunshine in the afternoon, but Mother Natured reminded us of who was in charge earlier in the day with rain, so we had some tough choices to make. It’s very difficult to reschedule something like this, but we can’t allow folks to golf during thunder and lightning, so we decided to skip our pre-golf contests to stay on schedule and allow the golfers a full round of golf.”

Fortunately, the mid-afternoon storm that was anticipated never arrived, but ASA-MI had already cut one of their new contests, which entailed getting the ball into an inflatable dinosaur’s mouth.

Referencing another new contest for 2017, Fisher shared, “We sold opportunities for golfers to use an air cannon on a Par 4 that would land their ball on the green in one shot – about 315 yards! People enjoyed that one so we’re going to definitely bring that back next year!”

Attendees had a great time networking with vendors and peers.

Fisher noted, “It appeared that everyone enjoyed the day, and we are so appreciative of everyone who sponsored the event and supported us again this year – they are a great bunch of people and diehard golfers, I might add. We were able to have and enjoy our contest holes during the round of golf.”

“It’s wonderful to have vendors step in and support our outing like these folks do – it really helps us put on a first-class outing and makes it a great networking event,” Fisher said.

ASA-MI’s 2018 Golf Outing will be held on July 8, 2018, and the association is currently working to finalize its 2017 Fall/Winter training schedule.