20 years ago in the collision repair industry (January 1995)

Participants at the Collision Industry Conference (CIC) in San Diego in January voted to reject the Automotive Service Association’s offer to fund and administer future CIC meetings. While shop owners, suppliers and insurers at the meeting praised ASA’s offer, many also said they felt ASA’s resources could be put to better use.

As in most years, 2014 ended with some unfinished business for the collision repair industry. Here’s a look at four of the news stories from this part year that will likely continue to make headlines in the year ahead.

1. “We are requiring that you have the separation of the work area, but that can be (achieved) using curtains and proper filtration; it’s not going to require brick and mortar.”

Aluminum was front and center throughout much of the collision repair portion of the 2014 SEMA tradeshow, including at one of the new features of this year’s event: the “OEM Collision Repair Technology Summit,” hosted by the Society of Collision Repair Specialists (SCRS).

20 years ago in the collision repair industry (December 1994)

The cause and effect of “prevailing practices” was just one issue addressed by an inter-industry panel at the National Autobody Congress and Exposition (NACE) Forum in Las Vegas in December. 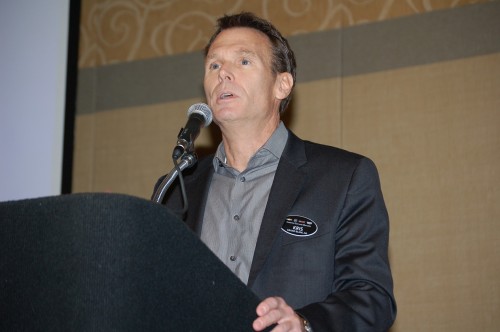 Kris Mayer of General Motors announces that the company will be discontinuing the publication of list prices for crash parts.

20 years ago in the collision repair industry (November 1994)
Recently I read an article that was critical of industry leaders who had not taken a stand against DRPs. It brought to mind a discussion I once had with (a member) who said there are things associations can do that make some members happy, but that don’t mean anything. He called it “feel good stuff.”

For association leaders to denounce all DRPs when half or more of their membership participate in direct repair programs would be nothing more than “feel good stuff.” It feels good to those who are not DRP shops, but what about those member shops who chose to go DRP?

20 Years Ago In The Collision Repair Industry (October 1994)

Responding to complaints from the collision repair industry, ADP will be pulling the plug on a program that allowed dealers to promote discount retail parts prices using ADP’s  “Parts Exchange New” system.

“As a result of the issues that responsible parties of the industry brought to our attention, we will be taking discounted OEs off the ‘Parts Exchange New’,” ADP’s Rick Tuuri announced at the Collision Industry Conference (CIC) held in Nashville, TN. “They will be off the system by January 1, 1995. I want to emphasize that this is no reflection on the way the discounted OEs themselves are doing business.”

Lawmakers and regulators on a state, federal and international level are working to make sure they can stay ahead of the quickly-developing “driverless vehicle” technology – but what will it mean for collision repairers?

Recent government data (see paragraph below) show that for a 5-year period ending early this year, the overall cost of autobody repair barely exceeded inflation over that same period (with the price of auto insurance rising even more during that period).

20 years ago in the collision repair industry (July 1994)

If the collision repair industry does not get clearly focused on what the mission is, it will be doomed to dance to whatever tune the insurance industry wants. Probably something like that old AC/DC hit, “Highway to Hell.”

PartsTrader proposed state limits on use of non-OEM parts, and challenging the automakers’ patent designs on crash parts were all being discussed when non-OEM parts manufacturers and distributors met recently in Austin, Texas.
The Automotive Body Parts Association (ABPA) allowed only members in the room during discussion at its convention of the association’s pending lawsuit challenging the validity of six of Ford’s design patents on collision repair parts. But proposed federal legislation that would reduce how long automakers can use design patents to prevent other companies from producing replacement crash parts was among the topics discussed at the event by Louisiana tax lawyer Cassie Felder, who is running for Congress.
Felder, a Republican who believes in tax reform and repealing the Affordable Care Act, told attendees at the ABPA event that having grown up in her parent’s Baton Rouge business, Felder’s Collision Parts, she has a good understanding of the issues facing the non-OEM parts industry.
“This industry hasn’t had a real friend in Congress,” Felder said. “For many of you who have been to the legislature, who’ve been up there trying to get some of these bills passed, fighting against some of the things that affect you, there aren’t a lot of real friends to the industry there, not a lot of people there who really understand this industry. And so it’s really important for you to pay attention to this race, and I’m asking for your support in this race.”
One of the issues Felder mentioned she would go to Congress understanding is the “PARTS Act,” an ABPA-supported bill that would slash automaker design patent protection from 14 years to just 30 months.
Felder also discussed the “devastating” impact that automaker parts price-matching programs have had on her parent’s business and others in the non-OEM parts industry. She said she drafted the lawsuit that Felder’s Collision Parts filed in 2012 against General Motors, alleging that General Motor’s “Bump the Competition” price-matching program was an illegal predatory pricing scheme designed to drive non-OEM parts distributors out of business. (A U.S. District Court judge dismissed the case in April, but Felder’s Collision Parts has filed an appeal of that decision. See Autobody News June 2014 issue.)
Felder asked ABPA members to support her campaign to represent Louisiana’s 6th Congressional District. She is seeking financial contributions (www.cassiefelder.com) both from individuals and through business political action committees.
“Obviously there are a lot of issues that are going to be affecting my district,” Felder said. “But this industry has been so important to me and my family, that this was absolutely one of the industries I wanted to target.”

State legislation related to non-OEM parts was also the focus of another presentation at the ABPA convention in Austin. Ray Colas, director of government affairs for LKQ Corporation, told the non-OEM parts suppliers that the body shop industry seems reinvigorated.
“PartsTrader is something that has motivated them, not only through legislation but also litigation,” Colas said. “With that momentum, they’re throwing us under the bus as well.”
In the past, Colas said, most of the legislative challenges to aftermarket parts came from automakers.
“But the body shops have really taken it over,” he said. “Now the automakers are supporting the body shop association initiatives.”
Colas talked about a number of bills his company successfully lobbied against, including one introduced in Maryland last year that would have prohibited the manufacture, sale or installation of a counterfeit or substandard airbag.
“Some of you may wonder: Why are we concerned about airbags? There are no aftermarket airbags,” Colas said. “Well, that’s true today. That doesn’t mean that in the future they may not exist. So we want to protect that market today in case in the future there is an opportunity for that. We don’t want to be restricted from selling any alternative part.”
Colas said after a “long, drawn-out fight” and “a very, very close call,” aftermarket parts supporters were able to convince Maryland lawmakers this year not to pass a bill that would require insurers to pay for new OEM parts for repairs to vehicles manufactured within the previous three years.
“Jordan Hendler (executive director of the Washington Metropolitan Auto Body Association, which backed the Maryland legislation) has done a great job educating these legislators, meeting with them year after year,” Colas said. “It’s something we really want to keep an eye on.”
A lawmaker in Iowa also needed to be “re-educated” about the aftermarket parts industry, Colas said, after he introduced at the behest of body shops a bill that included a provision similar to the one in Maryland. Colas said that lawmaker’s district includes an LKQ facility.
“We got there and told him, ‘Hey, you’re really going to affect our business,’ ” Colas said. “This is how many jobs we have in your district.”
Colas said the Iowa bill also included provisions prohibiting an insurer from recommending a shop without also telling the customer they aren’t required to use a recommended shop, and from requiring a shop “to use a specific vendor or process for the procurement of parts or other materials.” Colas said those provisions will likely be included in a future piece of legislation.
“There will be a bill that’s reintroduced, but it will not include the aftermarket parts restriction,” Colas said.

Ken Weiss, director of business development for PartsTrader, also spoke at the ABPA convention, just days after his company completed national roll-out of its system, now reportedly used by more than 7,500 body shops and 8.500 parts suppliers. Weiss said that by the end of this past April, parts lists from more than 700,000 estimates had been put out for quote through PartsTrader, and more than 1.25 million orders totaling more than $450 million had been placed through the system.
Weiss said although State Farm “is a little bit restrictive with regard to aftermarket parts,” he expects non-OEM parts orders through the system to increase as shops use PartsTrader for non-State Farm jobs.
He cited a number of benefits that PartsTrader offers suppliers, including “increased sales opportunities and fewer parts returns.” However not everyone at the ABPA convention agreed with Weiss on this last point.
“We have not noticed a lower return rate on (parts ordered through) PartsTrader versus phone calls versus faxes versus anything,” Bob Petty of Collins Collision Products in Loveland, CO, told Weiss. “Our return rate is higher than it’s ever been in the history of the company.”
Petty also asked if returned parts are taken into account in the fees PartsTrader charges to suppliers, which are based on average monthly sales. Weiss said they are, provided that parts purchased through the PartsTrader system are also returned though the system.
“We all know the games today where repairers will buy multiple parts, sometimes just to get a receipt that they can show somebody else, and then return the part,” Weiss said. “With the PartsTrader system, you can only buy a part once unless you return it. Then you can buy the part again from another supplier. So we think that will avoid some of the games and will help bring down the returns.”
Weiss was asked if there’s a way for a shop to bypass the system to return a part.
“Only if you let them,” Weiss told the parts distributors. “If they want to return a part, you need to tell them, ‘You bought this through PartsTrader; you need to return it through the system,’ so you get credit for the return.’ If they don’t want to return it through the system, then, I hate to say it, but they are probably up to no good.”

Helpful Documents, Tools, Information Only a Click Away For Shops

Looking for tips, tools and resources to help your business, defend your positions or do your part for the industry? Here’s a collection of links to sites, documents and information you may find interesting and useful.

20 years ago in the collision repair industry (April 1994)

Retired Automotive Service Association (ASA) lobbyist Don Randall told the group that current antitrust laws are strangling collision repairers by giving insurers an unfair advantage to meet and set policy language and contract definitions. In essence, he said, insurers have the ability to set market prices while collision repairers do not.