Some Positive Trends for Collision Repairers Amid Pandemic Fallout 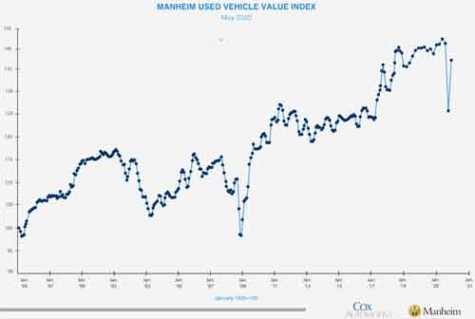 Manheim’s used vehicle pricing index in June had rebounded significantly after a record-setting drop this spring, reaching levels higher than a year ago, which will help prevent more vehicles from being declared total losses.

Although the tough times shops are experiencing in some markets aren’t over, the summer has brought some sunnier trends for the industry.

Here is a collection of some potential good news for collision repairers.

Given the link between used vehicle pricing and the percentage of collision-damaged vehicles declared total losses rather than repairable, collision repairers tracking the fluctuation in second-hand vehicle values this year have to feel like they’ve been on a wild roller coaster ride.

Vehicles are generally declared total losses when the cost of repairs exceeds some percentage of the vehicle’s value prior to the accident. When used vehicle prices drop, it takes less damage for repair costs to hit that total loss threshold.

And drop they did this spring. Wholesale used vehicle prices in the first 15 days of April decreased 11.8% compared to a month earlier, according to Manheim. The used vehicle auction company reported its mid-month “Used Vehicle Value Index” fell to 125.2 points, a 9.6% decrease from the same period a year ago. The prior record for decline in any month was 5.5% in November 2008.

Manheim also pointed out, however, that when its used vehicle value index fell 10.5% over two months in the fall of 2008 at the start of the Great Recession, the horizon looked bleak then as well, yet vehicle values fully recovered seven months later.

Sure enough, this year there was a strong---nearly 9%---rebound in May, Manheim reported, bringing pricing to within 1.9% of what it was a year earlier. The index then jumped another 6.6% in the first half of June, erasing much of the spring decline and reaching a level that is actually 4% higher than last June.

Admittedly, there are still factors that could lead to a lot of instability in used vehicle pricing in the coming months.

Rental car companies continue to send significant numbers of used vehicles to the auctions as they reduce their fleets in response to the drop in travel.

Repossessions are also picking up, and while automakers delayed some turn-back dates on leases this spring during the worst of the COVID-19 impact, more of those vehicles also are expected to join the parade of used vehicles hitting the market.

Still, the fact that the large decline in the spring didn’t hold should come as welcome news to collision repairers.

Traffic levels are getting closer to 'normal'

Traffic analyst firm INRIX at the end of June halted the weekly reports it was producing on traffic levels around the country given that by its system of measurement---a comparison to weekly traffic in February---personal vehicle traffic on a rolling seven-day national basis was back to 100% as of June 25.

As July began, more than 34 states had traffic levels higher than in February, according to INRIX, and only three states had declines exceeding 10%: Hawaii (still down 43%), California (down 12%) and Arizona (down 11%). Forty-two of the 98 metropolitan areas INRIX tracks in the U.S. had traffic at or exceeding February levels.

Previous Page Next Page »
Read 335 times
More in this category: « Hundreds of Individuals in the Industry Get Much-Appreciated Help from Foundation Shops Taking Action to Boost Business, Help Employees and Community »
back to top