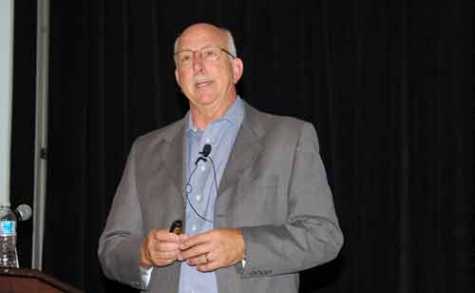 John Shoemaker said because of a lack of detail, too often shop estimates “create more questions than answers.”

Sean Guthrie, like Shoemaker, said it comes down to good documentation.
“You have to photograph the car in the bay, set up with the targets. Sometimes you can photograph the scan tool during the different steps,” said Guthrie, director of operations for Car Crafters Collision Centers in Albuquerque, NM.
“But if you properly document what the OEM tells you to do and you did, you will get paid. I have yet to be turned down," Guthrie said. "Sometimes it takes a couple steps up the ladder, but if you have the proper documentation, right from Audi, right from Honda, it’s really hard for them to deny it. And when you ask them to deny it in writing, you get the go-ahead pretty quickly.”
Panelist Mark Allen, collision and equipment manager for Audi of America, said shops need to consider more than just the financial ramifications of proper calibrations.
“Morally, if you don’t get paid for it, do you still do it,” Allen asked rhetorically. “Even if you don’t get paid, you still do it so you can go to sleep at night because you know the customer is not going to die.”
Allen was asked why OEM repair procedures in some position statements are identified as “recommendations” rather than “requirements.”
“Nothing that lawyers, guns and money won’t fix,” Allen quipped. “We have to deal with lawyers’ interpretations of the law. If you come to my class, I will tell you: You have to do this. But in a statement in public, we have to say ‘suggest.’”
Shop owner Guthrie said he’s found a way to explain automaker “recommendations” to the company’s staff.
“I tell my guys: If you recommend to your kid not to do something wrong, and he still does it, he still gets the same punishment even though you ‘recommended it’ rather than telling him, ‘You can’t do that,’ right? It’s just your verbiage is a little softer up front, empowering them to make the right decision,” Guthrie said. “We always tell our guys: Just because (the OEM) empowered you to make a decision doesn’t really mean you have a decision to make. You already know the answer, which is to follow what the automaker says.”
Allen said he believes the key to the issue is getting the OEM procedures linked into the estimating systems.
“Have the estimating systems query the OEM repair procedures, and boom, it’s there. Put it in there,” Allen urged the estimating system providers.
Aside from push-back from insurers related to the costs of ADAS calibrations, Guthrie said those procedures sometimes also lead to concerns from customers.
“They’ll wonder why we had to drive the car as much as we did, or they’ll think the vehicle doesn’t act like it did before,” Guthrie said.
Sometimes it’s an issue of them simply not remembering how the ADAS worked in their vehicle after driving a rental vehicle with different ADAS for a while, he said.
« Previous Page Continue reading »
Read 862 times
More in this category: « Industry Discusses Why So Many Repair Jobs Are Done Without Scans, OEM Research New Automaker Limits on Vehicle Scanning Among Topics at CIC »
back to top