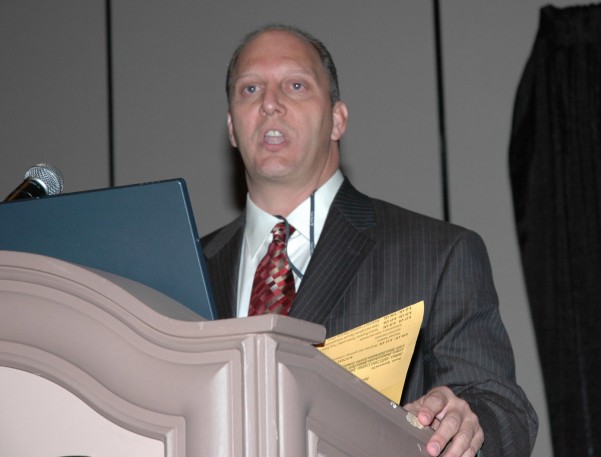 20 years ago in the collision repair industry (December 1996)

Texas shop owner Joe Sanders delivered a hard-hitting NACE Chairman’s opening address, touching on nearly all of the industry’s hottest issues. He criticized the computerized estimating system provider for focusing more on removing overlap than on automating “add-ons.” He called on paint manufacturers to strop trying to block point-of-sale controls on product clearly labeled as “for professional use only.” He said shop owners are tired of doing more work to use non-OEM and salvage parts while benefitting less financial for doing so. And he called on I-CAR to define an “industry-acceptable repair” in order to help the industry cope with rising consumer expectation and the threat of diminished value claims.

Many of his comment were directed toward the insurance industry. He criticized their use of unfair caps on materials. He praised State Farm and U SAA for developing internal systems to accept any of the three automated estimating systems, and called on other insurers to follow their lead. He said it was up to the top insurance executives who attend NACE to relay needed information to others in their company and industry.

“Please help us carry the message back to other insurers, adjustors, supervisors and appraiser that the abuses of the automated estimating systems must stop,” Sanders said. “If we are to stay controlled to the tenth of the hour by the times posted in these systems after overlap deductions, then we must be compensated for the additional operations not included at the original calculation. We are tired of hearing we’re ‘the only one who asks for it.’”

– As reported in Automotive Report. In the year following his address at NACE, Sanders sold his two Texas shops to Caliber Collision (his son Mark is president and chief operating officer of Caliber); he continued to work as a consultant and in various capacities in the industry before retiring in 2005.

15 years ago in the collision repair industry (December 2001)

Despite its substantial investment, the Automobile Club will have no control over day-to-day operations, and will not have access to information other than what pertains to its insureds.

“We have been using Caliber since 1991, and we just like what they do,” said Jim Gilmartin, senior vice president for insurance operations at the Automobile Club. “Their performance has been exceptional, not only I the way they deal with our members, but the services they provide: the speed with which cars are repaired, the good feelings our members have in their relationship with Caliber, the quality of the repairs.”

Caliber has been part of the Automobile Club’s “Immediate Repair Program” since 1991, and Gilmartin said that in investing in Caliber, his company hopes to see Caliber expand into other areas where the Automobile Club sells insurance.

– As reported in Hammer & Dolly. Caliber is now based in Texas and has more than 400 shops in 16 states and the District of Columbia. In 2003, Texas passed a law restricting insurer ownership of collision repair shops, a law that insurers challenged for five years all the way up to the U.S. Supreme Court but was eventually upheld. So in order to continue expanding in Texas, Caliber in 2008 sought funding from a Canadian investment firm that enabled both Zurich Financial Services (of which Farmers Insurance is a subsidiary) since 1997, and the Automobile Club of Southern California to cash out their investments in Caliber.

10 years ago in the collision repair industry (December 2006)

If refinish labor times on repaired panels are going to be adjusted from those in the estimating systems – something 96 percent of shops say they have seen insurers do –the printed copy of the estimate should show what the original labor time is.
That was the recommendation of the Collision Industry Conference (CIC) Estimating Procedures Committee at the conclusion of a panel discussion on the topic in Las Vegas.

“The committee’s recommendation is to show the reduction amount as a separate negative line entry, or clearly document the calculation,” Mike Anderson, a member of the CIC committee who moderated the panel discussion, said. “So on the bottom of the estimate, for example, line 42 would tell you a refinish time was changed from, say, 2.2 to 1.6. Then as the end-user of that estimate, you would be able to know the time was changed and by what magnitude.”

Anderson, owner of Wagonwork Collision Centers in Alexandria, Va., opened the panel discussion with the responses he received from the estimating system providers to a series of questions the committee asked about manual changes to refinish times. [Anderson said that shops say] the justification they are given for such changes is that the changes are being made on refinish labor times for “partial refinish” of repaired panels.

“In some cases, the system generated blend times are being applied to repaired panels, which appears to be in contradiction of database guidelines,” Anderson said.

If a shop received a printed estimate written in an estimating system the shop doesn’t have, the only way to know that refinish time has been changed is to note the asterisk by the labor time. But even so, Anderson said, the shop has no way of knowing what the original labor time was if they don’t have that estimating system, so there is no way to audit how significant a change has been made.

– As reported in Autobody News. Anderson sold his shops in 2010 and is now an industry trainer and consultant. Representatives of all three estimating systems at the CIC meeting acknowledged the committee’s request for the additional information on estimates. None has made the change.

5 years ago in the collision repair industry (December 2011)

“From a performance standpoint, we’ll give them a chance to see if they can get there… If any of our businesses can’t obtain their targets, obviously we’ll look at alternatives, whatever that means.”

– As reported in CRASH Network (www.CrashNetwork.com), December 19, 2011. Nine months later, DuPont announced it was selling its 11,000-employee automotive paint business to private equity firm The Carlyle Group for $4.9 billion in cash. The company was later renamed Axalta Coating Systems, and The Carlyle Group sold off its remaining interest in the company this past summer.