Two industry veterans, with over 100 years of experience between them, recently brought an innovative paint curing technology to North America that offers collision repair owners potential energy and cost savings, as well as increased productivity in their shops. As the owners of D&S Curing Solutions, Doug Verdier and Sam Midgley are the official North American suppliers of the Ionitec Gas-Fired Infrared Technology. It is the only fully robotic piece of equipment that can be retrofited into any paint booth and used with all types of paint, including High Solids or water-based paint materials. The car is shown in the paint booth with the robot curing device.

“The machine focuses energy just on the specific areas on the automobile that are about to be cured,” said Verdier, who installed the equipment in his Oregon-based shop, Active Auto Body, on October 2, 2014. “It definitely benefits shops by saving on their gas bill and by getting work out faster, putting more cars through the paint shop everyday. The system is very easy to use and my painter took to it within days.”

Located in the center of Portland, Verdier said his shop has the capability to bring in more work but there is only so much room to expand. Working on high-end vehicles, Verdier said “We can only hurry them so fast before we start jeopardizing the quality of the repair.”

He found that by adding the paint curing equipment to his existing paint booth, it doesn’t take up any more space in the shop and has helped with efficiency. “This equipment allows the body shop to move things through the paint shop much faster and they’re cured completely once they leave the booth so your body shop manager or your technicians can put them back together without messing up the paint. The paint is fully cured and it’s like working on a car that has come off the assembly line or from the dealership.”

Typically, he said a shop with one booth might paint four or five cars a day.

“With this piece of equipment, you can easily step that up to eight to 14 cars a day,” said Verdier.

“With the Ionitec curing process the only thing that is dried or heated are the panels that have been painted,” said Midgley. “With our system there is no need to heat the entire booth and total cross linking occurs within seconds at a temperature on the panel of around 250 degrees F. When the car comes out of the spray booth it is fully cured and ready for final assembly or minor polish and delivery to the customer.

Midgley said unlike other machines, you do not have to mask the plastic parts with a protective coating to keep them from melting and it only takes one passage to cure the job. “You press a series of buttons on the machine and the curing process starts automatically,” he explained. Curing is when there is a full cross linking of the paint molecules. This process, called “exothermic reaction,” ties the paint molecules together and creates cross linking. “This allows a quick turnaround time for customers with the same result you would get from the car factory when the car was first painted,” said Midgley.

In addition, he said the process saves a massive amount of energy --  up to about 95 percent by not having to heat the entire spray booth -- and also improves the gloss.The paint curing system received a green energy award in Europe at Automechanika in September 2014.

Verdier and Midgley have been friends since 1957 when Midgley immigrated to the United States from Australia and met Verdier at school in Concord, CA, located east of San Francisco. Verdier’s father owned an auto body repair shop in Rodeo, CA where Verdier and Midgley eventually worked. In 1976, Verdier moved to Oregon and opened a Porsche body repair shop in Portland. Midgley joined Verdier and helped as a painter in the shop. Two years later Verdier opened Active Auto Body. Meanwhile, Midgley had moved back to Australia to work for Ford Motor Company in Design Engineering and then joined General Motors manufacturing for 25 years, working throughout Australia, North America, Europe and Asia-Pacific as a paint specialist. He was hired back at Ford Motor Company Asia-Pacific to look after six assembly plants as a paint engineer. He also has a long association with lean manufacturing in both companies.

When Midgley decided to retire, a friend of his with a large body repair shop in Melbourne asked his opinion about a new technology called gas-fired infrared curing systems, manufactured by the Italian-based company Symach.

After learning more about the technology, Midgley was offered a job as a training manager for Symach in 2011.

Following extensive training at the Symach facility in Bologna, Italy, he came back to Australia to teach body shops how to use the technology and shared the information with Verdier.

One year later the two traveled to Italy and came across Ionitec’s robotic system. After visiting nearly a dozen shops throughout Switzerland, Italy and Germany, Verdier said he was so impressed with the system he immediately purchased a machine for his own collision repair shop.

“The success of this technology in Australia and Europe has really taken off in the last five or six years,” said Midgley, who predicts the United States will soon follow their lead.

“The insurance companies are really pushing hard on the body repair shops to get their costs down,” said Midgley. “With this system you can get your costs down and improve your output at the same time.” 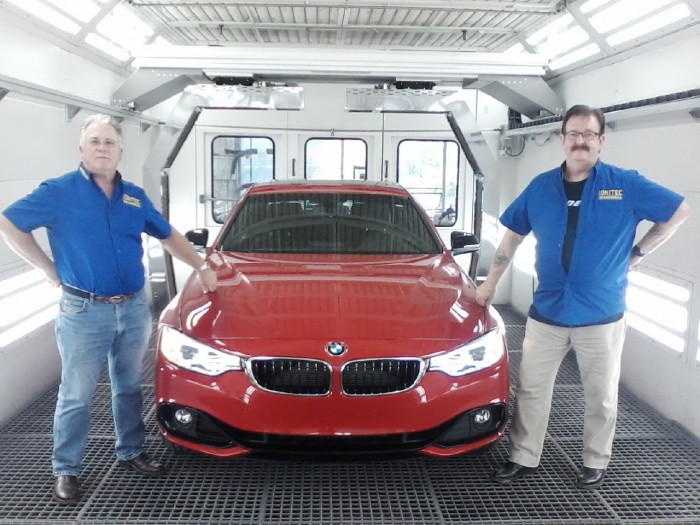 Doug Verdier (left) and Sam Midgley (right) in the paint booth with the 1st Ionitec Gas-Fired Infrared Technology in the U.S.A.

Once a shop purchases the paint curing technology, a full measurement of their paint booth is taken and then the equipment is manufactured in Italy. After installation, Midgley and Verdier will take the shop through a full training process that normally lasts one or two weeks.

“I think this would be a benefit to any shop that is conscientious about trying to save on fossil fuels as well as any shop that has a progressive attitude to improve work flow and generate more revenue for their shop," said Verdier.