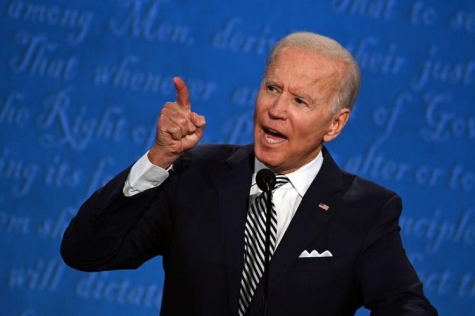 President Joe Biden is expected to announce a pledge April 22 to cut U.S. greenhouse gas emissions in half within less than a decade.

Biden will announce the aggressive pledge, according to multiple reports, the same day the White House hosts dozens of world leaders for a virtual climate summit. The pledge would commit the U.S. to lower its emissions by 50% from 2005 levels by the year 2030.

But critics were quick to point out flaws with the plan.

"Based on currently available technology, there is no way to halve America’s emissions in such a short period of time without radically impacting our battered economy," said Heather Reams, executive director of Citizens for Responsible Energy Solutions. "We know that by 2030, 90% of all new emissions will come from the developing world and China, so we need solutions that can be adopted as readily in India as in Indiana."

During the summit, which also falls on Earth Day, leaders will discuss a range of environmental and energy issues like coal power plants and carbon emissions.

Though Biden has not made the formal announcement, his rhetoric on the campaign trail indicated he plans to take an aggressive stance on environmental issues.

“As president, Biden will lead the world to address the climate emergency and lead through the power of example, by ensuring the U.S. achieves a 100% clean energy economy and net-zero emissions no later than 2050,” Biden’s climate plan released during the presidential campaign says.

“He will lead an effort to get every major country to ramp up the ambition of their domestic climate targets,” the plan adds.

Biden’s pledge could devastate parts of the country reliant on fossil fuels for their livelihood. Wyoming and West Virginia have the most significant coal producing capabilities, followed by...