Fast Advances in Technology Adding to Friction Between Insurers and Repairers 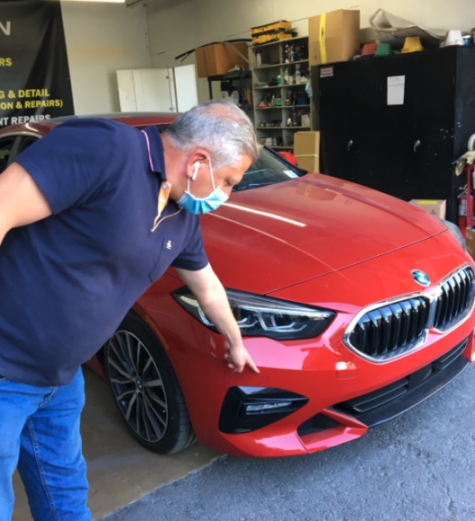 Waseem Tarashibi points out an ADAS sensor on the front bumper of a BMW at his shop, CollisionTech, in El Cajon, CA. He said such details can be easily overlooked if collision repairers don’t follow manufacturers’ protocols. Photo by Jim Sams

“How do you know what’s under there?” asks Frank Terlap, an inventor who co-founded a company that makes calibration equipment for automotive safety systems and author of a book titled "Auto Industry Disruption."

According to Mitchell, a San Diego-based claims administrator and data analytics provider, 93% of vehicles on U.S. roads are now equipped with advanced driver assistance systems, known in the industry as ADAS. Those systems generally require recalibration after a crash.

Terlap said industry data shows collision repair shops aren’t performing nearly as many calibrations as they should. Mitchell reported last September only 8.5% of claims for repair to vehicles in the 2018 to 2020 model years generated the line item that indicates an ADAS calibration was conducted.

Terlap said the vast majority of late model cars require a calibration after a collision, yet the insurance industry has no measures in place that ensure all of the work that should be done after a collision is done.

Perhaps for good reason. Terlap said ADAS calibrations can add $300 to $2,000 to the cost of repair.

Terlap said much of the tension between insurers and collision repairers dates to the creation of direct repair programs, where work is done at body shops that belong to an insurer’s network. He said insurers tell the repair shops what they will pay for and what they won’t, so work that is required according to the manufacturer’s specifications might not get done if it’s not included in the insurer’s DRP agreement.

Manufacturers, on the other hand, are keenly interested in proper repair procedures. They know from market research that customers who are unhappy after a collision repair are much more likely to replace their vehicle with another brand, he said. That’s why some manufacturers are...