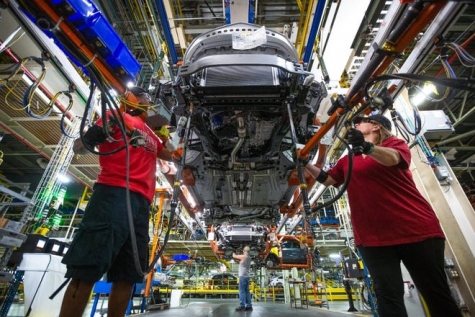 General Motors is idling three of its assembly plants in North America and running a fourth in South Korea at half capacity for one week as it struggles with the ongoing semiconductor shortage that has already impacted production at Ford Motor Co., Stellantis and others globally.

On Feb. 8, GM will idle the following plants---which run two shifts---for a week:

Some related GM plants that supply engines and other parts to the plants to be idled may be minorly impacted. For example, the engine plant at GM's Spring Hill Assembly complex will reduce a shift on one engine line next week because GM sends that engine to Fairfax.

In addition, GM will run its Bupyeong 2 assembly plant in South Korea at half capacity beginning the week of Feb. 8. GM builds the Chevy Malibu, Trax and Buick Encore SUV there for sale in the U.S.

On Jan. 22, Business Korea reported GM planned to cut vehicle production by suspending overtime and extra work at its Bupyeong plant because of the semiconductor shortage. It uses the chips in its electronic control units and infotainment systems.

"No production disruptions," GM spokesman David Barnas told the Free Press the last week of January. "There were rumors last week from suppliers that our Korea operations were being disrupted. But GM Korea corrected those stories."

Barnas said GM will not idle Bupyeong, but will merely run it at half capacity for a week, starting Feb. 8.

The UAW reacted to GM's news by saying its leaders continue to work with major employers, the Biden administration, Congress and suppliers to address the semiconductor shortage.

"Over the past 30 years, production of semiconductors has been offshored to South Korea, Taiwan and more recently, China," said UAW spokesman Brian Rothenberg in a statement. "Today, the United States only controls manufacturing for about 14% of all semiconductors."

The union negotiated worker protection in the event of parts shortages interrupting production in its contract, he said. Union workers will receive...

...supplemental pay and unemployment that pays 75% to 80% of salary and continued benefits.

"However, the UAW is working with employers to minimize the impact on auto manufacturing production as much as possible," Rothenberg said.

GM said union workers at CAMI, represented by Unifor, will be paid through the provisions of their labor agreements, noting that represented seniority employees will receive about 75% of their compensation through a combination of unemployment and supplemental benefits.

Demand for semiconductor use is up in part because of the coronavirus pandemic and an increase of laptop computers, which use the semiconductor chips. Cars also use them in a variety of parts and infotainment systems.

The union said if the parts were made in America, the industry would have "more ability to respond to these demand issues," Rothenberg said. He added the UAW is calling on the government to develop trade and policy solutions to bring advanced technology production back to the U.S.

GM's Barnas said semiconductor supply for the global auto industry remains very fluid and its supply chain organization is "working closely with our supply base to find solutions for our suppliers’ semiconductor requirements and to mitigate impacts on GM."

GM is assessing the overall impact to production and Barnas declined to provide an estimated production impact from the planned plant closures.

"Our focus is to keep producing our most in-demand products---including full-size trucks and SUVs and Corvettes---for our customers," Barnas said.

...Wentzville Assembly in Missouri and its full-size SUVs at Arlington Assembly in Texas.

All four plants will continue to run on three shifts and weekend overtime, Barnas said. GM builds the Corvette at Bowling Green Assembly in Kentucky.

GM's assembly plants in Lansing and other parts of Michigan will continue to operate regularly.

"Due to the fluidity around the availability of parts, our current plan is to update the plants each week," Barnas said. "Our intent is to make up as much production lost at these plants as possible. Importantly, this issue will not impact our commitment to an all-electric future."

GM will provide further details on the semiconductor issue when it reports its 2020 earnings Feb. 10.

Ford has been hit hard by a global parts shortage with factory workers in several states receiving temporary layoffs or shift reductions. Ford has reduced shifts at its Michigan Dearborn Truck Plant, which employs 4,600 hourly workers and builds the 2021 F-150 pickup.

Ford's Louisville Assembly Plant is down through Feb. 7 because of...

...the shortage. That affects about 3,900 hourly workers building the Ford Escape and Lincoln Corsair.

Stellantis planned to shutter plants in Mexico and Canada, building the Jeep Compass and Chrysler 300, Dodge Charger and Dodge Challenger, through the end of January.  A Stellantis spokeswoman said Wednesday that its North American facilities are running in February and the automaker continues to work closely with its global supply chain network to monitor the industry-wide issue.

Automakers globally that have been impacted by the chip shortage and have cut production include Toyota, Volkswagen, Honda, Mercedes-Benz, Audi, Subaru and Nissan.

GM's Global Purchasing and Supply chain organization has managed to fend off plant disruptions until now in part due to getting a jump start on the problem, a source familiar with the matter said, but declined to be named because he is not authorized to share information with the media.

The group also has a lot of experience from setting up ventilator manufacturing in a matter of days last spring and managing GM through the 2010 tsunami in Japan.